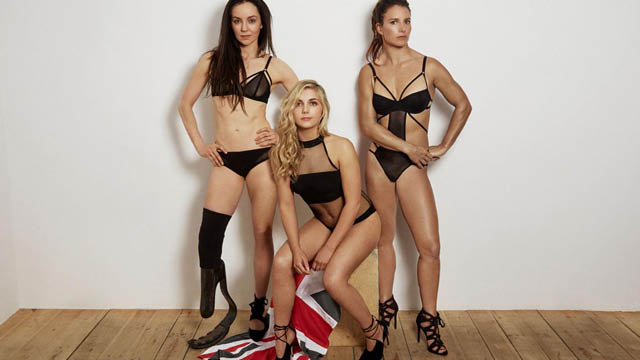 Three British female athletes Bryony Shaw, Stef Reid and Amber Hill have all stripped down to their undies in conjunction with Bluebella in a new campaign to empower women called ‘Be Strong, Be Beautiful.

They are backing a campaign to get girls into sport after research revealed many drop out at school after the age of 13 due to ‘body issues’. Team GB windsurfer Bryony Shaw, skeet shooter Amber Hill and Paralympian long jumper Stefanie Reid will all be going for gold in Rio.

Amber Hill is the youngest ever Skeet World Cup gold medalist and the youngest member of the British shooting squad for 2016. She made her national debut at the 2015 inaugural European Games in Baku where she took gold. Amber also won gold at the ISSF World Cup Final in Cyprus that same year. Previously, she won the 2013 BBC Young Sports Personality of the Year award when she was only 16. In 2013, after a number of encouraging results, she travelled to the World Cup of Skeet Shooting in Mexico and also achieved a gold medal, making her the youngest ever winner of a woman’s senior gold medal. Stef Reid has won medals at both Beijing 2008 and London 2012 and is a 5-time World Record holder. She was also the first British amputee to model at London Fashion Week. Watch out for her on Channel 4 this summer where she will be providing expert punditry and analysis.

Bryony Shaw is a star performer – she won bronze in Beijing 2008, the first ever women’s windsurfing medal for the British team, followed by gold at the 2010 World Cup, another bronze in a 2011 Olympic test event and fourth at the 2012 World Cup. Restricted to 7th place at London 2012 due to illness, she is heading to Brazil this summer seeking yet more medals.

Got to www.bluebella.com to see more