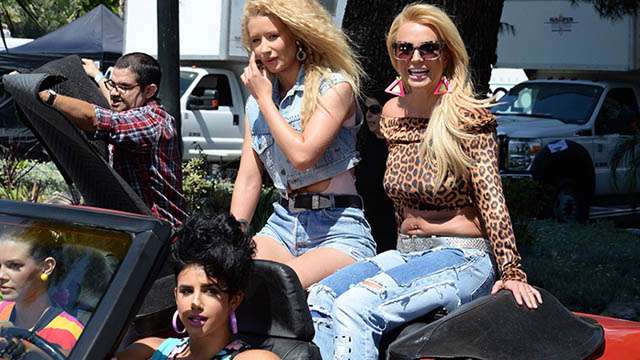 The ladies seemed to be having fun as they cruised down Ventura Blvd. in their old-school red convertible Mustang. Iggy rocked crimped blonde hair, a denim vest, and shorts, while Brit wore a leopard-print crop top. In addition to starring in the video, Iggy co-directed it.

“That’s been awesome, not only just getting to work with her and write the song, but being able to have something to do with the visual and all that has been great,” the Aussie rapper told “Access Hollywood.” “It’s been just an honor that she would even let me do that for her, so I’m super excited.”

Britney tweeted some of the lyrics: “Girls roll up, windows roll down, eyes on us, jaws on the ground.”

Check out some behind-the-scenes images below.