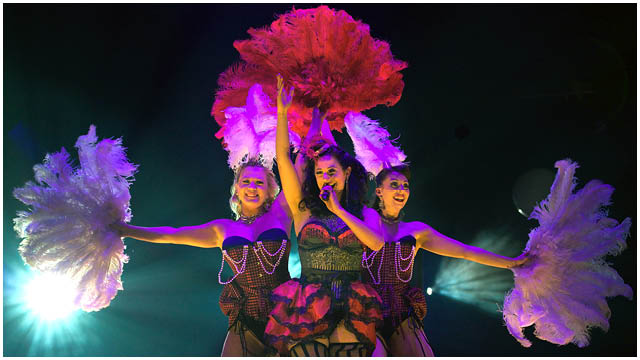 From intimate cabarets to burlesque shows, Jazz band and even an anti art school plus much more. Its time you visit the London Wonderground 2015 at the Southbank Centre.

A dusty desert bar. A chance encounter. A squad of daredevil acrobats with nothing to lose meet a vigilante jazz band with something to prove. Prepare to be staggered by glamorous physical feats and heady gypsy beats like you’ve never seen or heard before.

Knock back your drink and enter the fray for a vertigo-inducing lock-in of world-renowned circus and jazz. With gravity-defying circus from some of Australia’s finest acrobats with previous appearances including Cantina, La Clique, Cirque and Tom Tom Crew, and music from the renowned Crusty Suitcase Band.

After a dazzling, sell-out run in 2014, the larger-than-life BRIEFS boys return to London Wonderground in 2015.
Your glamorous host Shivannah will guide you through a jaw-dropping, eye-popping evening of extravagant birdbath boylesque, too-close-for-comfort yo-yo tricks, valiant aerial acrobatics, irreverent interludes, and show-stopping drag artistes.

They’ve spent the last year touring the globe, from Berlin to Brisbane, and now they’re back, with more circus skills, more disorder and more burlesque… with balls!
Age limit: 16+ The Black Cat Cabaret draws inspiration from the Absinthesoaked alleys of vintage Montmartre, featuring an explosion of mad musicians, acrobats, comic characters and walkabout street performers – brought together by the intoxicating spirit of the moon. Shortlisted for Best Production at the London Cabaret Awards 2014, this expanded version of 2013’s smash hit show is the place to encounter modern cabaret in all of its wondrous variety – from the sacred to the profane, the lyrical to the downright louche.
Age limit: 18+

Boom-Tish! Comedy and Variety at its most awesome. End your Bank Holiday Weekend with a night like no other. Bringing together some of the top names in stand-up. musical comedy, sketch, ventriloquism and magic, from the worldwide circuit. Garnering a cult and celebrity following, Boom-Tish! has presented a tonne of fancy shin digs, acclaimed underground performances, as well as smashing the Latitude Festival. Come and see why.
Age limit: 18+

THERE’S A FIRE IN THE DISCO. And we started it. Cabariot is more than a show; it’s a movement. A night of passionate polemic. A burn book for Generation Y. Disorder, dissent and drinking. Angry, but funny, and a bit sexy. Held together by Frisky & Mannish. It’ll be a riot. A CABARIOT.
Age limit: 16+

Disco dancing. Pop-up performances Briefs boys. Add some sensation to your Saturday night at Club Briefs. Seen the show? Want to see even more? Get your dancing shoes on with cult cabaret hooligans and mischief makers BRIEFS in a late night romp of music, performance and mayhem – all inside London Wonderground’s stunning Spiegeltent. Marvel at your favourite Briefs boys and their guests as they show off incredible circus, variety and burlesque – and show off some moves of your own! Experience for yourself the club night that spawned this international hit.
Age limit: 16+

Your aberrant host Benjamin Louche introduces the underground cult cabaret phenomenon, a dark and troubling cabaret dream from another place, taking inspiration directly or indirectly from DAVID LYNCH’s air of mystery and nightmare, all served with humour “Black, like midnight on a moonless night…” Think the finger-clicking jazz ambience of cult TV show Twin Peaks, think the absurdist monochrome machine world of Eraserhead; from the dark underbelly of Mulholland Drive, to the surreal small town madness of Blue Velvet, an evening of “Damn fine” Lynchian Cabaret & Burlesque, of mystery and nightmares from the deepest river of your dreams…
Age limit: 18+ Dr. Sketchy’s is the world’s premier alternative drawing movement. Started by artist Molly Crabapple in New York. Dr. Sketchy now attracts audiences in over a hundred cities across the globe (including New York, London, Paris, Tokyo and Melbourne) it’s the little Brooklyn event that has exploded into an international phenomenon. So here in London we’ve scoured this great city to find beautiful burlesque performers, bizarre circus acts, and rippling hunks of man-flesh. Then we let them loose on stage for you to sketch in an atmosphere of artistic mayhem. In between each round of sketching you get a chance to grab a drink get comfortable and take in some of the finest cabaret the big smoke has to offer. Hosted by Dr. Sketchy’s evil headmaster Dusty Limits. It’s what art classes would be if the class was let loose in the Moulin Rouge.
Age limit: 18+ For the fourth successive year, the ladies from the House of Burlesque bring an evening of exhilarating and extravagant entertainment to the Spiegeltent! Hosted by the bawdy and beautiful Miss Tempest Rose and featuring a selection of the finest international burlesque stars, this show-stopping night of glamorous entertainment features the glorious gang’s both charming and challenging showpieces. The very best in burlesque. Hold on to your stockings!
Age limit: 16+

Lili la Scala’s stunning new show Siren debuted to thunderous applause and excellent reviews at Adelaide Fringe 2014; the show blends Lili’s classical roots with dark eclectic songs in a bewitching theatrical voyage. Through salt-sprayed music in the key of sea Lili presents found songs – from the poetry of Masefield, to the music of Tom Waits – intertwined with haunting and mesmeric stories as she presents her collection of timeless, beautiful siren songs. Lili la Scala is one of the UK’s top female cabaret comperes, in addition to performing critically acclaimed solo shows at festivals around the world.
Age limit: 14+

Treat yourself to a late night date with Lili la Scala & her glittering cavalcade of Cabarati. Following sell-out runs at London Wonderground 2014 & Edinburgh Festival Fringe 2014, this year promises bigger names, bigger songs and even higher heels. Previous guests include The Boy with Tape on His Face, The Gentleman Juggler Mat Ricardo, comedian Jason Manford and many more. This show promises a host of world-class guests for your delectation. Early booking advised.
Age limit: 18+

2015 sees the long awaited release of the second volume of Country Music legend Tina C’s biography. Thrill at the epic journey from white trash roots to White House aspiration with a multitude of eye-popping, heart-hurting, tearjerking stories about everyone from Tammy to Taylor, Mother Teresa to Bashar al-Assad – beautiful songs and the best legs in the business.
Age limit: 14+

BOOKING INFORMATION
Tickets for the full programme will be on general release from 30 January 2015. There will be a second on sale on 20 February 2015.
Online:  www.udderbelly.co.uk | www.londonwonderground.co.uk | www.southbankcentre.co.uk
By Telephone: 0844 545 8282
Lines are open from 9am-8pm, 7 days a week.
In Person: Southbank Centre Box Office