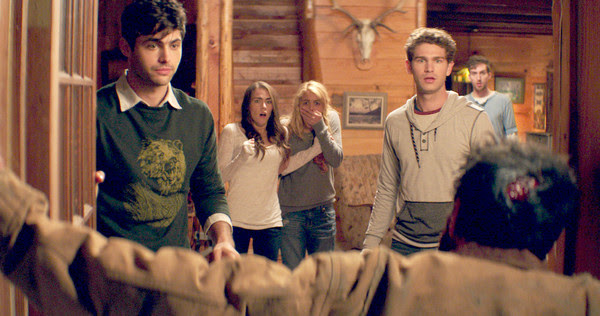 Being his first film Cabin Fever was never Eli Roth’s best movie but 14 years after the release of the original Director Travis Zariwny has taken the 2002 outing and rebooted it to what would seem to be to appeal to a new generation with hilariously bad efforts that make the first look like a masterpiece.

Isn’t the whole idea of a remake to maybe inject something new and fresh into a dated film, well it would appear Zariwny and his team simply lacked that creativity with Cabin Fever 2016 and have just repeated the same story. A group of five friends consisting of three jocks and two girls takes a trip into the woods for the weekend, their aim to party and indulge in debauchery but someone forgot to bring the weed.

Once at their isolated cabin, they realise that the lack of a TV and connection to the outside world isn’t exactly what they bargained for. It’s not too long before strange happenings start to plague the group with encounters with the strange locals and a rabid dog that just won’t leave the property. Something quite sinister is happening here but no one knows what it could be. Turns out there is some kind of flesh eating germ painfully devouring anyone it comes into contact with, melting away the skin to the bone.

With an abundance of sex, nudity and fake blood – which there seems to be no attempt made to make it look authentic – our characters are picked off one by one whilst trying to escape their fate. There’s no method or grace to the approach of our doomed group of victims, a cast of insipid unknown actors playing insufferable and spoilt teens just makes you want them to hurry up and meet their maker.

Another factor that simply doesn’t make this work is the high definition visuals; it’s almost too sparkling with cinematic flare. What makes a good horror is the fact it looks dark and gloomy with a tinge of grain in the film. This is a prime example of modern technology not working for the big screen. In fact, we can’t even class this as a horror as no matter how horrific some of the scenes may be there simply are no real scares in fact it’s almost cringe-worthily funny.

Cabin Fever is in Cinemas from Friday, May 13.