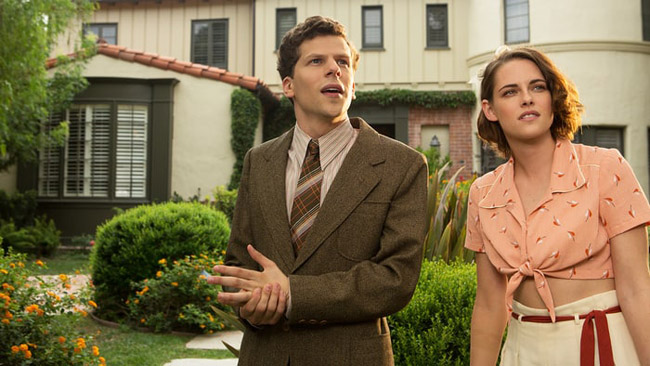 So very typically Woody Allen, Cafe Society has that demure and romanticised imagery of elegance and grace of 1930’s Hollywood and New York. Lavished in the fascination of the middle class with lashings of opulence, but this vintage Allen lacks the substance to maintain its beauty.

Written, directed and narrated by the soft slow tones of Allen, Cafe Society has nostalgia for the Golden Age of Hollywood in abundance – names of the Hollywood elite are dropped braggingly yet casually into conversation as they flicker across the screen in the background – and a cast that seems to be effortlessly comfortable in the authentic settings give a quaint, touching and so cleverly sweet charm.

Bobby Dorfman, played by Jesse Eisenberg with an air of a young and excitable Allen himself, is the youngest of a Jewish family in New York, disillusioned with following into his Father’s business as a Jeweller, his mother convinces his Uncle Phil (Steve Carell), a big shot Talent Agent, to take him under his wing when Bobby moves to Hollywood. Bobby is introduced to Vonnie (Kristen Stewart) as she is tasked to show him around town. He instantly falls in love with her beauty and grounded nature, with the innocence and naivety of a boy he tries everything he can to win her over but after a whirlwind romance she rebuff’s this love sick puppy for her married lover.

Heartbroken and forlorn Bobby moves back to New York where he begins work as a nightclub manager for his gangster brother’s club – a club in which attracts the rich and famous as well as the murderous mob types –This is where he meets his future wife, divorcee Veronica Hayes (Blake Lively). Everything seems to be going smoothly until one night Vonnie – who is now married to the lover she chose over him – frequent the club. Seeming somewhat of a changed woman, becoming someone she used to loathe Bobby is unimpressed until they go out for a night alone in New York where all those romantic sparks start to fly once again.

The cast is absolutely perfect; Eisenberg plays almost what seem like two characters, bounding from an excitable young man to a mature hardened person caused by his broken heart. Stewart is surprisingly likable and simply epitomises 30’s grace with her shy yet seductive demeanor, and Carell – in a role which was originally to be played by Bruce Willis – as a man that struggles with his own emotional and moralistic values.

Everything here screams Allen as he has amalgamated so many themes from his past projects into one, except the lack of overwhelming melancholy –which thankfully gives a lighter tone without the self-pity. However, interest starts to wane as the New York period begins and the lack of presence from Stewart. This makes it feel stretched out, making this hour and a half seem more like two and a half hours.

Cafe Society is out in cinemas September 2.