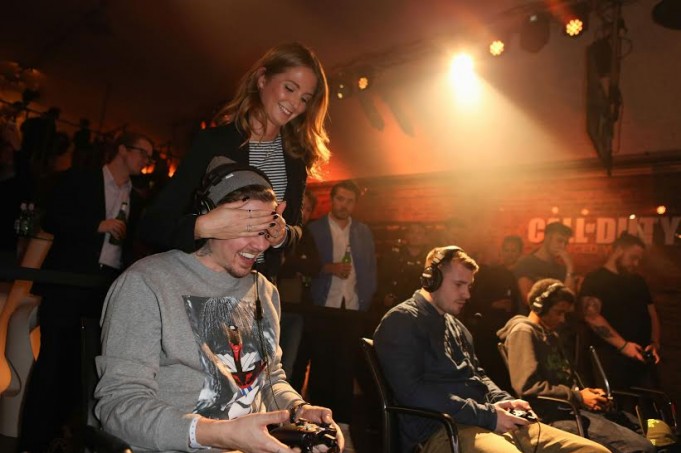 Call of Duty: Advanced Warfare launched at Shoreditch Studios in London last night at a star filled bash. Celebrities including Professor Green, Millie Mackintosh, Tinchy Stryder, Harry Kane, Cesar Azpilicueta, Ryan Bertrand and more turned out to get their hands on the game ahead of its release at midnight.

For the first time ever, Call of Duty: Advanced Warfare fans enjoyed the latest instalment of the franchise on Monday 3rd November, a day ahead of the game’s Standard Edition release. To celebrate, Call of Duty invited fans to participate in a livestream on Twitch.tv to mark the arrival of the latest entertainment blockbuster on Day Zero, last night.

A special two hour livestream event on Monday evening gave Day Zero players the opportunity to go head to head with a cast of celebrity fans, including Professor Green, Tinchy Stryder, Harry Kane, Cesar Azpilicueta and Ryan Bertrand, from the comfort of their own homes.

Call of Duty: Advanced Warfare takes players to a future devastated by a global attack. Academy Award® winning actor Kevin Spacey stars as Jonathan Irons – one of the most powerful men in the world and leader of Atlas, the world’s largest Private Military Corporation. The most powerful military force in the world, Atlas has effectively become a superpower for hire. Playing as Jack Mitchell, players become the advanced soldier as they suit up in a revolutionary exoskeleton and join a highly-trained unit committed to restoring order.

Check out some more photos in our gallery below!