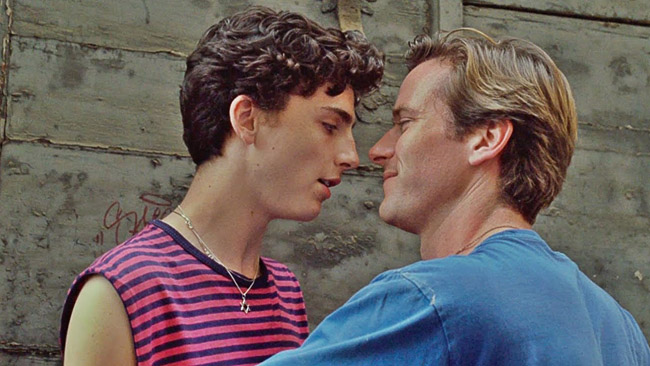 Love is love no matter what gender it befalls; Luca Guadagino states this fact boldly and without repercussion in such a delightfully tender composition, elegantly sneaking up on the audience with a warmth that sings out with operatic audacity. Brokeback Mountain, this is not, the brashness of the relationship between the two men there was laden heavy with bigotry, whereas, Guadagino’s Call Me By Your Name is an affectionate love story, still shrouded in secrecy, yet has an underlying acceptance of one’s sexuality.

Set in the early 80’s, in a unassuming village in Italy, Elio (Timothée Chalamet) either spends his vacationing days riding around town on his bicycle showing Oliver (Armie Hammer) around the town blissfully taking in the sights, totally mesmerised by this mysterious visiting stranger, exploring his sexual desires with a young local girl whilst his head is completely consumed with thoughts of the American or transcribing classical music and creating the pieces on his guitar.

Oliver, a research assistant, is one of many yearly visitors to his parent’s majestic home to help Elio’s father, Professor Perlman (Michael Sthulbarg) with his archaeological findings. Oliver’s aloofness and overbearing confidence comes across as annoying arrogance to Elio in the spring of his stay but there are is an undercurrent of inquisitiveness sparking Elio’s interest. As the men start to bond over there Jewish connections (Oliver openly wears a star of David around his neck, where Elio’s mother suppresses that part of their ethnic heritage) and swim’s in the scenic lakes and ponds they begin to become a little more intimate. Where Elio finds it hard to hide his infatuation he has for Oliver, Oliver is more restrained for fear of “doing something wrong”, always raising the question whether he is just playing, with Elio’s teenage affections.

An air of rustic beauty runs through the very core of Luca Guadagino’s lush full, coming of age, sexual exploration, and love story with nuanced true to life detail. Stripped bare of his stylised setting from A Bigger Splash, Guadagino puts emphasis on the earthy tones and breezy ethereal touches of realism. Elio, so pent up with sexual frustration even has a dalliance with a fresh and very juicy peach but there is a certain class to these gratuitous scenes with just a hint of suggestion instead of a full-blown explosion.

Hammer and Chalamet are tremendous as the affectionate lovers, in the well-paced narrative that bamboozles with its pure unadulterated splendour as if we are experiencing every moment for ourselves. Michael Sthulbarg rounds off the film with a touching speech of acceptance to his son, where some parents are so un-accepting of their offspring’s sexual preferences, he opens his arms and his heart which exudes nothing but love to a devastated young man.

Guadagino’s gay love story is nothing but an ode to lost loves and a delightful wonder which is worthy of an Oscar and more come awards season. Effortlessly charming and heartbreaking in one fail swoop.