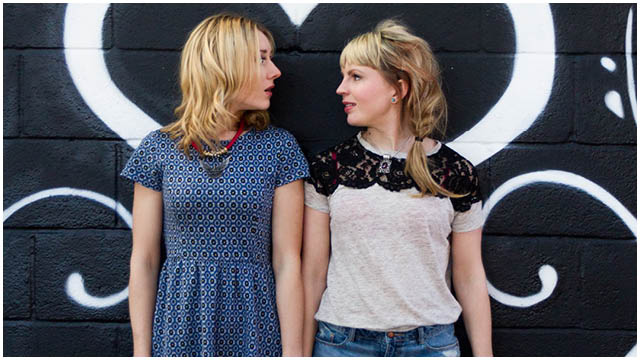 Sounds Of The Sirens from Devon can now cross that particular achievement off their bucket list having performed at the legendary festival this year. The duo of Abbe Martin and Hannah Wood brought their brand of British folk to the Avalon Stage at the yearly event and duly captured their audience with their on stage chemistry and of course their brilliant compositions.

Having been together since 2005 this year they released their third EP the rather poignantly titled All We Have Is Time-a treat for those that seek to delve into something with a bit more substance.

Right introduction completed let’s have a word with the duo. Sounds of the Sirens what a name-explain the origins?
It’s the ethereal mermaid, men luring kind of name-think Ulysses. We like to think we would make pirates crash on rocks but we are not so sure.

Why was it not until 2013 that you actually became a duo?
We started out as a 3- with Lisa Eyre and we all sang in a Functions band. We then decided to start writing our own music and learn to play instruments. Lisa moved to London to teach the youth of tomorrow whilst we refused to grow up and continued to sing.

So give some history on your discography and indeed how is your current ep a progression on those previous EP’s?
We have put out material since 2010 with our first EP-It’s me I’m here. In 2013 we put out a live album called Along Way To Fall and in 2014 we put out Under The Stars and a charity single. They all build up to where we are today and tell a bit of a story of our musical and personal journey. The new EP features other artists that we have met-good friends Olivia Dunn on fiddle and Lukas Drinkwater on double bass. It was recorded at Valvetastic studios by Jolyon Holroyd, a producer who is absolutely brilliant.

Before talking about your single how did ASOS support your Glastonbury performance and indeed how did you get to perform at Glastonbury?
ASOS were kind enough to dress us, something we need help with. They sent us some amazing clobber to wear for our Glastonbury performance and we have been wearing it ever since. We got to Glastonbury through 5 years of persistent nagging followed up by some more nagging from Mad Dog Mcrae- they caved in the end.  Glastonbury that must have been amazing explain the experience of performing for us that it will never happen to!
It’s fantastic and we were on such a high to look out and see a tent full of smiling faces. There was a really good atmosphere and we were buzzing. A queue (an actual queue) formed of people buying CD’s at the end and we couldn’t believe it. Our egos have been fed for at least a decade. It was the best experience for us after working hard for so long in a notoriously tough industry and we couldn’t be happier.

Your sound is described as inspired by Mumford and Sons so with this current track Confessions does it remain inspired by Mumford?
We love Mumford and Sons and we have followed their rise from the days of playing in The Cavern in our city (Exeter). They have a distinctive sound and their passion shines through their music and we really hope ours emulates this. I think we are all inspired by people we admire and therefore there is probably a bit of many musicians we love in every song we sing.

Lastly what’s your year plan?
We are off to Carfest next week where we plan to become best friends with Chris Evans, feature on his breakfast show. At some point we will go on the Jonathon Ross Show for Lolz and meet Lorraine and publish a book and next year have a greatest hits before being signed and finally become Goodwill Ambassadors and hang out with Angelina Jolie… if that doesn’t happen we will carry on gigging, writing and learn to do interviews really well.