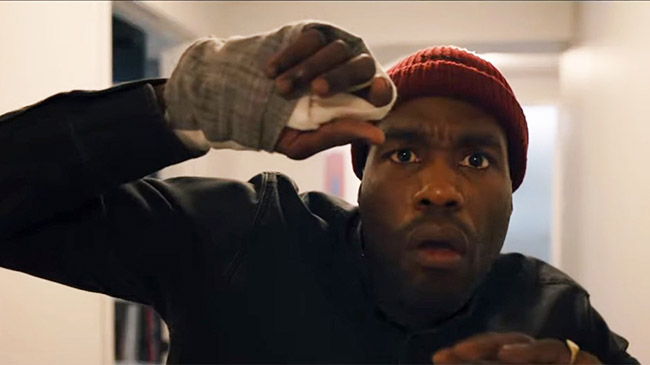 Bernard Rose’s 1992 adaptation of Clive Barker’s novella gave birth to a frightening legend amongst a whole generation that preys on our fears to this very day. Nia DaCosta’s follow-up to that film injects the legend firmly in this telling with fantastical cinematography, sturdy links to the 1992 version, social commentary and a touch of tongue in cheek comedy, but if you are coming for the scares be prepared to be disappointed.

The story, and foundation of this film, begins in 1977, in the Cabrini-Green – the exact setting of Rose’s version – a young boy ventures to the community laundry room, watched over by white cops who are on the hunt for a murderer with a hook for a hand. After hearing the boys screams, the cops run over and yes the all-white police enforcers beat said man to death.

Skip to the present day, where the plot revolves around the sometimes shallow Anthony McCoy (Yahya Abdul-Mateen II), I would say struggling artist but he lives with his Art dealer girlfriend Brianna (Teyonah Parris) in a luxury apartment on the outskirts of Cabrini-Green. After concentrating his artistic visions on the Black struggle, Anthony now finds he has hit an artistic block; but after Brianna’s flamboyantly gay brother and total scene-stealer Troy (Nathan Stewart-Jarrett) recounts the story of the 1992 Candyman, Anthony is once again inspired by the story and is compelled to honour the legend in his next collection. However, reawakening this old tale has dire consequences as twists unearth themselves.

DaCosta has teamed up with Get Out’s Jordan Peele and Win Rosenfeld to collaborate on the latest contribution to this frightening story to give it a 21st-century update that plays on the gentrification of ghetto hoods, pushing out poor black communities to replace them with luxury housing mainly for rich white people. The film also leans heavily into the Black Lives Matter movement and the Black community’s constant struggle against violence at the hands of the racist white man. It has to be said, it’s actually quite refreshing to see that the Black characters aren’t the ones to get killed off first.

But while the white folk are the idiots who dare to recant the name of the legend five times in front of a mirror (hey I won’t even write the name five times, I am not stupid) and subsequently and deservedly pay for it with their lives, it doesn’t quite hit that fear factor at full throttle. I found myself inwardly cheering as they were ripped in half…

Brilliantly interspersed with the silhouette images from Kara Walker to retell the historical background of the brutal story of how a Black man was beaten by a vigilante group of white men, had his arm cut off and covered in honey and left for Bees to sting him to death just because he had impregnated a white woman. It goes on to present the subsequent so-called kidnapping of a black baby by a white woman who went on to die rescuing the child from a bonfire. At this point, it may just be worth revisiting the older story.

DaCosta on the whole has delivered a confectionary delight of importance and a fitting way to carry this legend forward giving another intelligent voice to the oppressed while putting in respect for those that have come before.