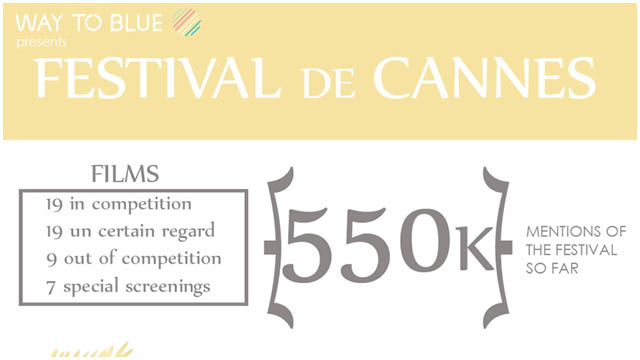 The historic Cannes Film Festival 2015 is well underway, and the team at Way To Blue has looked at what people are talking about online so far – which are the films to watch; which was the best party on La Croisette; should men be forced to wear high heels on the red carpet too?!

Take a look at this fun infographic Way Too Blue have put together covering what topics of are creating the most buzz on social media.

The annual Cannes Film Festival has generated over 550,000 global English mentions so far, with Mad Max: Fury Road being the most talked about film. George Miller’s reboot of the cult classic generated 17,081 general mentions and 3,153 Intent-To-View (ITV) mentions, as of May 19.

A big topic of conversation on La Croisette this year has been women in film, which generated over 5,000 mentions. This was topped only by conversation regarding the glitzy parties (9,834 mentions) that have become as big part of the festival as the films themselves.

Women also shone on the red carpet as the top five most talked about celebrities at the festival were all women. Academy Award winner Lupita Nyong’o generated the most buzz with over 16,000 mentions, followed by Cate Blanchett, who generated over 12,000 mentions.

Salma Hayek, who spoke at the Women in Film panel hosted by the United Nations and Variety Magazine, also made the top five with over 10,000 mentions.

There is another week of festivities on Cannes and Way To Blue will be back next week with a round-up of how the festival has played out on social media.