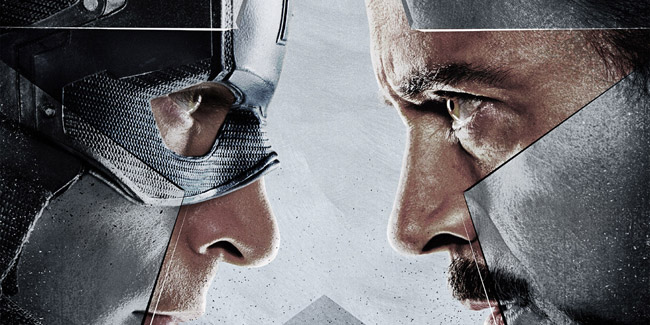 In Captain America Civil War, Marvel, yet again, proves they are the masters on the Superhero battlefield. Leaving their nearest opposition for dust and laughing in their face. Marvel show all of the other contenders exactly how it should be done with EPIC force.

The Avengers seem to have been part of the big screen for a lot longer than the four years that they first came together in such a spectacular mission. However, Captain America: Civil War see’s these American Heroes finally part into two factions after yet another mission is explosively botched by the team.  The UN is called in to take control of the Avengers which causes the rift. The Sokovia Accord is put into place, signed by 117 disgruntled countries that have had enough of the wayward antics of these uncontrollable and destructive hero’s. Money man Tony Stark (Robert Downey Jr.) aka Iron-Man is all for the idea as he is riddled with guilt but it’s Steve Rogers (Chris Evans) aka Captain America who refuses to accept this new order.

Marvel hasn’t always got it so right – I think we would all rather forget Age of Ultron. What wins our vote is the fact we have no real bad guy to root against here. Even the audience will find it hard to choose who they stand beside as each man both have floored arguments. Yes, Bucky Barnes (Sebastian Stan) – Rogers old friend turned assassin – comes out of the woodwork after his showing in The Winter Soldier, but it’s clear that he is struggling with his own fate which sees’s Rogers taking him under his wing to protect.

In any other context, the amount of characters that fill this explosive struggle simply wouldn’t work but each and every member is essential to this storyline, each getting their share of the limelight even if it is brief. We also have the newbie’s entering the pack. The introduction to our new and improved talkative Spiderman (Tom Holland) is genius, for years we have been crying out for a Spiderman that is worthy of this role and Holland takes it all in his plucky little stride.

Along with Paul Rudd’s Ant-Man – who has managed to get one of the biggest scenes in the fight sequences – the humour unfolds – and it is needed at times to break up the tension. Also joining the Avengers fold is The Black Panther (Chadwick Boseman), the son of an assassinated African King out for vengeance in the name of his father.  Evans with his clean cut chiselled looks takes Captain America to a whole new dimension further cementing in stone why he makes this role so effortlessly perfect for him.

We may have already seen Superhero pitted against Superhero this year in the woefully disappointing Batman Vs Superman, but stripped away is the cheese that writer’s Stephen McFeely and Christopher Markus could so easily have been sucked into. The script at times is lacklustre; they have manipulated the storyline to give it more depth to engage the audience which doesn’t quite have the desired effect. However, no sooner as your mind starts to wander your catapulted straight back into the action with seamlessly flawless choreographed fight sequences. Gone is the obvious – The Villian – but who needs it when you have so many Superheroes’ – still friends – but fighting one another for what they believe is right.

Captain America: Civil War is out in Cinemas April 29.