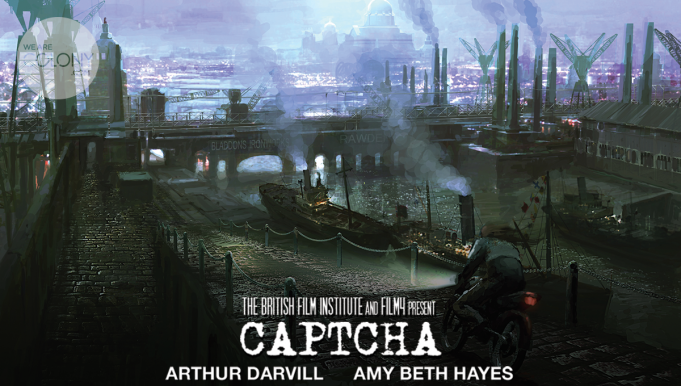 Short films just don’t get the credit or attention they deserve from the general public and this is a major shame, this is brought home even more after the pure quality and visual delights witnessed in Captcha.

Set in 1940’s London, a very quiet and normal government scientist (Arthur Darvill) is implanted with a device that switches on his ability to fall in love. Unfortunate for him he falls in love with the female spy (Amy Beth Hayes) who injected the implant into his body. However, after he is hospitalised his death is ordered and she now faces a dilemma whether to save the man she has actually fallen in love with and betray her mission or carry out the task. Either way it leads to a whole new set of issues.

Captcha is the brain child of director and writer Edward Tracy, whose vision on this stunning film noir piece has seen this short already win Best International film at the Sci Fi Film festival in 2014 and has been nominated for many more film festival outings in 2015.

Visually, Captcha is nothing but spectacular, the images are clean, vivid and fresh, the use of SFX though out the film is just beautiful and this is complimented more by the haunting yet subtle soundtrack that gives that perfect atmospheric feel which draws you in and leaves you wanting more.

The only drawback about this film, at 15 minutes long, it just isn’t long enough. You’ll hit the end of this short craving more, it feels like one extra long trailer for which should really be turned into a feature film. The storyline is well thought out and quite a unique look at how cupid hits us all in mysterious ways and for those of you who thought shorts don’t star any actors you know this again is out to prove you all wrong. The leads are played perfectly by Arthur Darvill (Dr. Who, Broadchurch) and Amy Beth Hayes (Mr. Selfridge), it feels these roles were made for these actors as their approach and portrayal just seems flawlessly natural. Not only do we have those guys but we also see Nigel Lyndsey (Alan Partridge, Four Lions) and the voice of Zoe Wanamaker gracing the story too.

Captcha is exactly what you ask in a feature film but condensed into a 15 minute short, Mesmerizing, stunning, intriguing and leaves you wanting to know and see more.

Captcha is only available to view on We Are Colony and if you sign up for an account you’ll get exclusive access to not only the film but a number of extra special features.

CAPTCHA and behind-the-scenes bundle is available now, globally and exclusively at We Are Colony