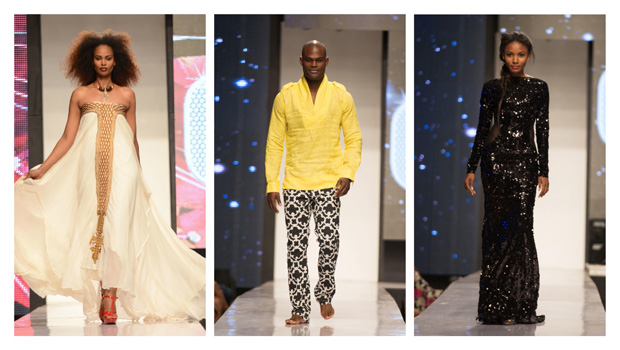 Caribbean Fashion Week 2013 (CFW) in Kingston, Jamaica, was deemed a resounding success, with highlights including the induction of Pulse and international Supermodels Jeneil Williams, Oraine Barrett and Nell Robinson into The PULSE Fashion & Beauty Hall of Fame recognising their contribution to fashion both locally and internationally (modelling for global brands such as Ralph Lauren and Jimmy Choo).

The event saw electrifying performances and entertainment from superstars such as Kelly Rowland, solo performer and the iconic drummer for mega star Prince, Shelia E and Jamaican reggae stars Sizzla, and Voicemail.

Designers from around the world and the diaspora presented standout collections on the CFW catwalk, including Award winning British designer, Gavin Douglas, who returned to show a full collection at CFW for the first time in 4 years. Caribbean designers made their presence felt with unique collections from Jamaican designers Ashley Martin showcasing her full on glamorous ‘Attitude’ line and Jacqueline Cohen of Mutamba who presented an earthy yet colourful collection. Trinidad fashion royalty like Claudia Pegus, Robert Young, Heather Jones and Zadd and Eastman who are original CFW designers returned to the CFW catwalk, having shown in the first year of the event in 2001.

Two of Ethiopian’s finest designers Fitkirte of Yefikir and Mahlet of Mafi represented the out of Africa experience along with the enchanting and alluring Ethiopian model Yardanos. Followed by traditional dancer and entertainer Kuribachew
Woldemariam nicknamed “Kuri”. Zimbabwe’s top stylist, Sabina Mutsvati also presented a stunning collection at the shows this year.

British brand specialist Kubi Springer and PR expert Jessica Huie, who spoke to designers on how to use branding and PR to monetise their creative business as part of CFW’s annual business forum. Huie and Springer announced the exciting launch of the Caribbean Fashion Week’s first shopping experience for 2014 allowing both attendees and a global audience to immediately purchase exhibiting designer’s collection online through the CFW website.

Kim Simplis-Barrow, wife of the Prime Minister of Belize and that country’s Special Envoy for Women and Children, headed a delegation to Caribbean Fashion Week from Belize. The delegation included officials, designers and models from that country. Belize is interested in developing its creative industries, including fashion. Since its inception in 2001, Caribbean Fashion Week has been the main catalyst for Caribbean fashion industry development. An ambitious project, CFW has brought the world of fashion to the region, as it seeks to focus international attention on what the Caribbean has to offer, while, at the same time, working with stakeholders to build capacity and generate business for Caribbean stylistas