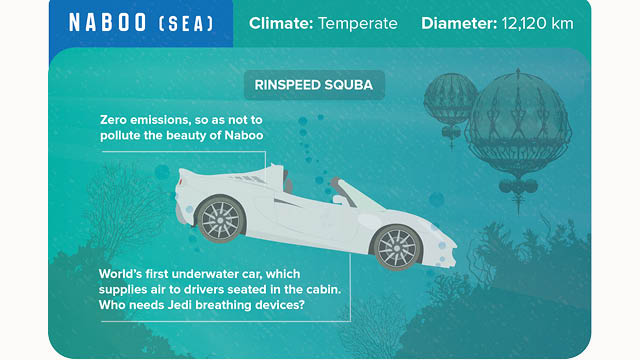 Star Wars fever has certainly gripped the nation once more.

The long-awaited Star Wars: Episode VII – The Force Awakens has been released on DVD and Blu-ray, the hype has already begun for the spin-off movie Rogue One with the first trailer now out and Star Wars Day is only hours away (it’s celebrated across the globe on May 4th ).

British car dealership Motorparks has also got caught up in the excitement surrounding this beloved franchise, though in a unique manner. This is because the company has analysed some of the most prominent planets found in the Star Wars Universe and tried to determine which vehicles could handle the terrains found on them.

Take a look at the visuals below and learn how the Jeep Wrangler would be an ideal vehicle on Luke Skywalker’s home planet of Tatooine, why the Land Rover Discovery Sport would be perfect to drive around the Star Destroyer graveyard found on Jakku and much more: