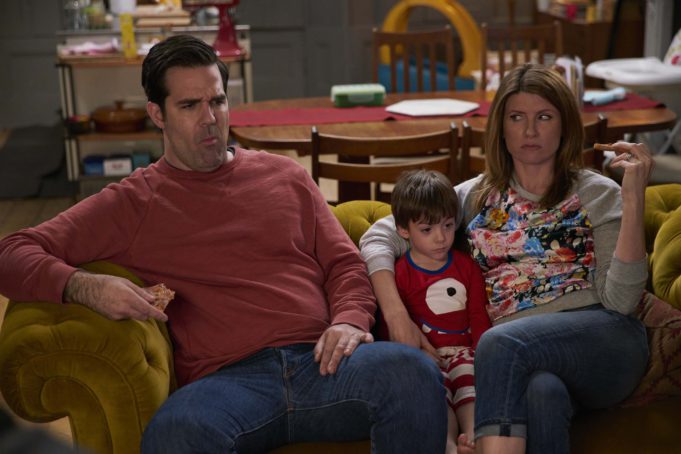 This month, Flavourmag had the chance to grab a sneak peek at the new series of smash hit, Catastrophe. Premiering back in 2015, February 28th sees the beginning of the show’s third season on Channel 4, and we were lucky enough to preview the first two episodes, which are just as lewd and hilarious as before.

The first episode picks up at the precise moment the last ends, with Rob (Rob Delaney) and Sharon (Sharon Horgan) sitting alongside young son Frankie, just after Rob finds Sharon’s receipt for the morning after pill. The episode finished abruptly as we waited to see exactly what Rob would say about his discovery. To honour this emotional cliff-hanger, we shan’t reveal whether Rob confronts Sharon, but what we can promise is that more catastrophe is certainly delivered.

At the current moment, Rob is without a job due to his sexual harassment case, and the first two episodes see him battle with various unbearable job interviews, plus the conflict of whether to mention the reason for his departure from his last job, leading him on the path of downing gin cocktails at lunch and smothering himself in cheese and onion crisps to mask the smell from Sharon. Sharon herself is also confronting her career head-on as she decides to return to work now Rob’s unemployed. This leads to a pained attempt at a memorial for a dead teacher and the new responsibility of becoming head of the juniors.

One thing both Delaney and Hogan have said about the situations their characters end up in is that they wanted to avoid a sense of moralistic self-discovery and instead of wrapping up cleanly at the end of each episode with hugging and growing, that what was more important was that it everything is relatable. Despite being named Catastrophe, the writers and stars said that ‘every problem isn’t the end of the world’ and perhaps what has made the show so successful is that it’s closer to a home experience than other sitcoms. Rob’s alcohol problem is one that they’ve described as ‘bubbling under the subtext ‘and they chose to bring this into play now purely because they ‘thought it would be fun’ to explore. Catastrophe has been described by many as a landmark show with a new tone and standard for comedies. When asked why they think that may be, Delaney and Horan chalked it up to their teamwork. They approach their characters with equality, something which alongside realistic marriages, they didn’t see in shows. ‘Being both writer and performer helps as we’re less inclined to guess’, Delaney explains as both talk about the relationship between writing the characters and actually performing them; ‘we have no interest in playing stereotypes’.

One thing Catastrophe is notorious for is its filthy humour. ‘Filth finds us, we don’t look for it!’ Horgan exclaims. What’s interesting to hear is that much like real life couples, Delaney and Horgan allow their characters to find each other funny, resulting in a much more free-flowing conversation, which of course translates into a high-standard of relatable yet outrageous comedy.

One more thing that was on everyone’s minds was Rob’s mum’s role in the show, now that the late, great Carrie Fisher has passed. The duo revealed that Fisher does make an appearance later on in the series and exclaimed how delighted they were to spend more time with her back during filming. After only a few days on set for previous series’, Fisher became ‘part of the gang’ this time round, and it’s clear to see that she brought a lot to the table when the pair look back at their experience with her.

Announcing that they’ve now been commissioned for a fourth series is a fantastic revelation, especially as it’s clear they certainly haven’t lost momentum in the new series, despite being a far cry from their very first life-changing accident back in Series 1. A lot of shows tend to lose their way when having to veer off their original premise, but from the first two episodes, it’s clear to see that the humour’s strong, the characters are strong but more importantly, their lives are still a catastrophe.