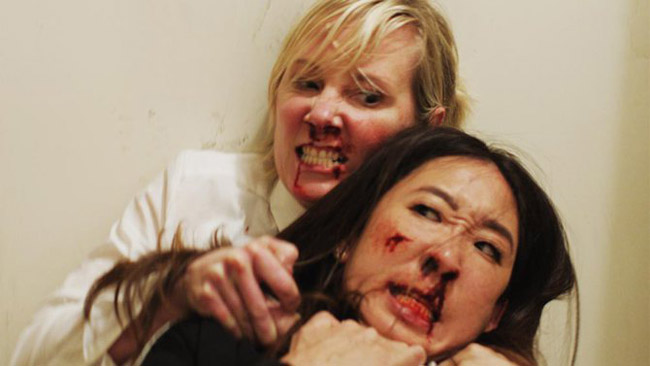 With a title such as Catfight, you would be forgiven for thinking you’re in for a saccharine, handbags at ten paces comedy of women with their perfectly manicured nails scratching each other’s eyes out over matters of extreme unimportance – this couldn’t be further from the mistitled vicious truth.

Broken down into three role reversing chapters which come full circle with brutally violent, coma inducing poundings dividing each section, Catfight centres around two very different women. On one side we have Ashley played by Anne Heche, an artist who portrays her anger with blood red colours in her relentlessly sadistic paintings. She hates anything cutesy like her assistant’s incessant scribbling of blue bunnies, subsequently treating her with disdain for it, all whilst trying to fall pregnant with her girlfriend. On the other side, we have Veronica played by Sandra Oh, A New York trophy wife with a teenage son, an unhappy marriage and a deep love for a glass of wine or two.

Director Onur Tukel doesn’t follow the conventional route for his female protagonists, there’s no preconceived notion that these women, usually portrayed by Hollywood as ditzy dumbass women falling out over men and the such – Instead he forces out the issues which sit deep under the surface bubbling just under the surface until the opportunity arises to finally air their grievances with each other. Veronica and Ashley were friends back in college but fell out when Ashley came out of the closet. When their lives cross paths at Veronica’s husband’s party, the first of the three blood spluttering and brutal fights comes in quick succession changing both of their lives in ways that are with a satire laced irony as brutal as the beatings.

The one constant over the four year period the story is the TV show that pops up on the TV throughout, the host joking about the political climate the world faces at that particular moment in time. From a new unnamed US President unleashing war on the Middle East, causing a volatile environment hitting a nerve all too close to the bone on the world’s current situation, but then turning it on its head with pointless entertainment of a fart machine, there are just too many similarities to be just a spooky coincident.

Even with exceptionally played out performances from both Oh and Heche, By the time we reach the third and final act in which we are lead to believe the pair may finally kiss and makeup, it all becomes just a little too much, feeling like you’ve just gone ten rounds with Mike Tyson, it becomes exhausting to watch, going just a step too far.

Catfight is released on March 10.