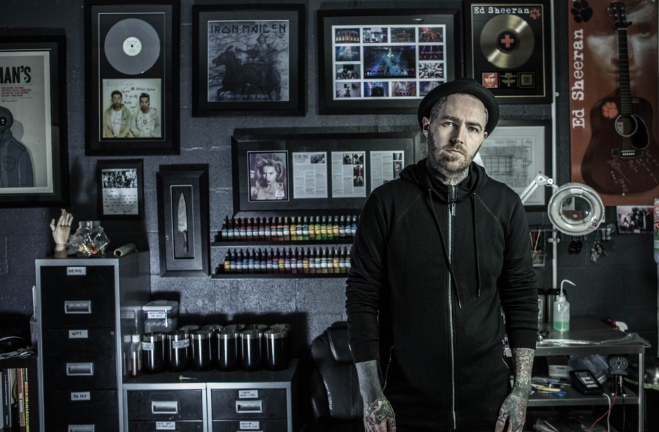 Celebrity tattoo artist Kevin Paul has come a long way, moving on from a life of crime to become a celebrity favourite for his beautiful ink designs.

His fans include a long list of well-known faces such as Ed Sheeran and Harry Styles, and his talents have been sought after by many TV programs. On an admirable quest to change tattoo regulations in Britain, Kevin stars as the face of new TV show Tattoo Disasters UK, a series where individuals share personal stories of tattoos gone wrong.

Check out our interview with Kevin Paul where he talks his TV Show, his autobiography and more.

You’ve built up a pretty impressive list of celebrity clients and fans along the way such as Ed Sheeran and Harry Styles how exactly and who first discovered your talent in order for you to become so popular amongst the celebrity world?

The first act was Rizzle Kicks. I met them at a uni gig one night about 3 years ago.

You’ve been in a number of TV shows such as Made In Chelsea and Last Chance Saloon and your currently the face of Tattoo Disasters UK on Channel 5, How does a Tattoo artist go from inking up people’s bodies to being on TV?

It’s been a long process. I have been asked to do so many things over the years, but have never had management like a music or TV act would, so I had to find my own way to do what was right for me. I knew I wanted to end up on TV from the first day I started it, I just didn’t know in what role.

The show follows people whose tattoos have negatively impacted their life, can you reveal to us what’s the worse story you have come across?

It’s hard to say what’s the worst – they’re all so bad! I’m covering a really bad scar on a girls arm at the moment. She has been hiding her arm for years. There is also a really good story about a young guy who got adopted by an old woman coming up in a couple of weeks. It’s such a sweet story, it’s nice to see there are still good people out there.

You’ve also released your own autobiography called A Sketchy Life – from trouble to notoriety, what inspired you to write your autobiography?

I did the book because I wanted to get the facts out there about what I have done and whom I have worked with and the facts behind each story. Every time the papers print stuff it’s often twisted – this way the facts remained true. I have also had a hard upbringing and I thought some of that might be of help to others facing the same problems I did. I hope it shows everybody that no matter where you come from, you can do great things if you work hard. For those that haven’t read your book is there some juicy tell all stories covered and do you regret revealing any of the stories you have covered?

I don’t really regret any of the stories. I made sure no names were used without permission. I think the main point was to show the public what really goes on backstage – not to name drop. It’s another world, you really need to see it to believe it.

Your life wasn’t all celebrity fans and TV shows, you’ve come from quite a troubled background, what has been your biggest regret and what gave you the kick up the backside to turn your life around?

I don’t know about regret because where I came from made me the person I am now. However, I got kidnapped when I was 17 and I really thought I was going to die that day. It was over drugs and my two mates and me were involved with some bad people and in way over our heads. After I got out of that I knew I had to stop. I never did it again after that, but it was not easy to get out of.

Your also an advocate for Tattoo safety regulations, Do you feel because of your high profile status that it’s your responsibility to make people more aware?

Yes I do. There are a lot of problems in the tattoo industry, and there are no laws to keep it safe, so anybody can get cheap machines and have a go. It’s shocking and it’s slowly destroying it for professionals. It’s only a matter of time before things get changed – I’m not giving up. David Cameron said on radio two years ago he would talk to me about it. I’m still waiting!

What has been the proudest moment of your career so for?

It’s hard to say. I try not to let anything go to my head, I just see it as a way to give my boys a good life, but meeting The Hoff was cool, haha!

What advice would you give to someone wanting to get a tattoo at an early age?, I ask this because when I have 3 myself, when I was 21 I got a tattoo of a devil on my shoulder which, after quite a few years later, I don’t really like anymore.

Yes, I started getting tattooed at 13 and I was almost covered by time I was 18. I regret most of that work. I don’t regret getting tattooed, just what I got. I think people should wait until they’re older, maybe 20, or only have things done with meaning. If it’s personal, I believe you will never regret it. Most tattooists will just get paid and do what you ask, so you really need to do your homework.

Catch Tattoo Disasters UK every Tuesday at 9pm on Spike