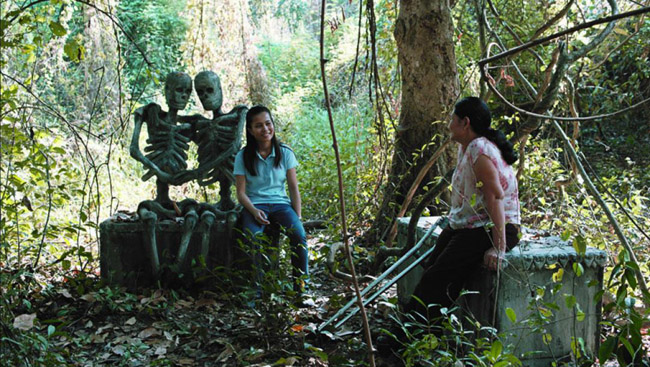 It’s hard to pinpoint exactly what the message of Apichatpong Weerasthakul’s Cemetery of Splendour is as the visuals unfold on screen.

Set in a hospital in Thailand, the story revolves around a group of soldiers suffering from a mysterious illness that results in them constantly sleeping and a volunteer nurse who forms a connection with one of them, through telepathy.

Although not obvious without following the subtitled conversations, the film is incredibly fantastical. Volunteer nurse Jen encounters apparitions including a casual run in with goddesses from her local temple who help themselves to her fruit, or the connection she has with one of the soldiers which when he’s asleep can be reached through a clairvoyant of sorts. She can see their dreams and at one point embodies the soldier as her and Jen take a walk through the grounds.

This air of mystic is felt throughout, complemented and enhanced by the calm pacing and sense of stillness. Each shot is beautiful and lingers as small actions are taking place. Some so subtle that may not be noticed unless full attention is paid.

A lot of subjects are touched upon: sex, death, reality, fear, and health to name just a few. The conversations between Jen and the soldier being the most delightful. Jen herself is a spritely personality despite her disability (one leg being shorter than the other requires her to use a walking stick).

While Cemetery of Splendour is a beautiful and charming film in not only its visuals but the emotions explored in the dialogue (even more so in the silence), it’s certainly not for those with a short attention span. Its wonder and magic can be lost in the very slow and slight pacing which is a considerable shame as it will be lost on many watchers. The lasting effect of the film is a head-scratcher, making you question exactly what the story was conveying to the audience. This will result in some being left unsatisfied or bemused and others wanting more or a rematch to understand the complexities – a very polarising piece of art indeed.

Cemetery of Splendour is released on DVD and Blu-Ray on November 7th.