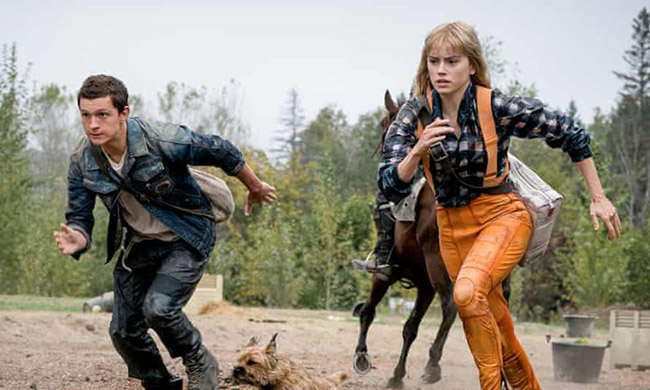 Filmmaker Doug Liman is back with a sci-fi YA adaptation that should have been firmly left on the bookshelf. A dull plodder where misogynistic men rule results in an empty husk of a story that should have kept its thoughts to itself.

Set on a planet, colonised by human’s, every man is betrayed by the mere fact their thoughts are heard by everyone, thoughts portrayed by wispy voiceovers and opaque purple clouds. In one western aesthetically built town, filled only by men because of the strange disappearance of women – a fact that eventually reveals itself as something rather sinister, a naive and broadminded Tom Hewitt (Tom Holland) knows no better as he is bullied by a line lacking Nick Jonas, and follows the rule of bitchy, power-hungry men (Mads Mikkelsen) with a secret to hide.

Low and behold, one fateful day another ship descends from the skies with more humans to fill the planet. Unfortunately for those onboard, it crash lands and the only survivor is Daisy Ridley’s Viola. Alone and far from afraid, she hauls herself up in the woods and a chance encounter sees Tom’s curiosity and libido get the better of him. To protect her from the wrath of man in the village the pair go on the run to safety.

To be fair, that’s all I can remember before mentally switching off this drooling mess of monotonous bilge. At every turn, Holland and Ridley’s talents are wasted. Their fight for survival across the barren lands of the planet is met with awkward silences and Tom’s anxiety of Viola hearing his thoughts laden with romantic feelings for her. At each turn, it’s missing something vitally meaty to bite into, a build-up of terror or something sinister to give it something worth grabbing hold off.

I dub this a tedious sci-fi western, not worthy of the title, The man behind films such as The Bourne Identity, Edge of Tomorrow and more is capable of so much better, this one obviously doesn’t translate from the page to the screen with exciting thoughts.

Chaos Walking is out on April 2nd