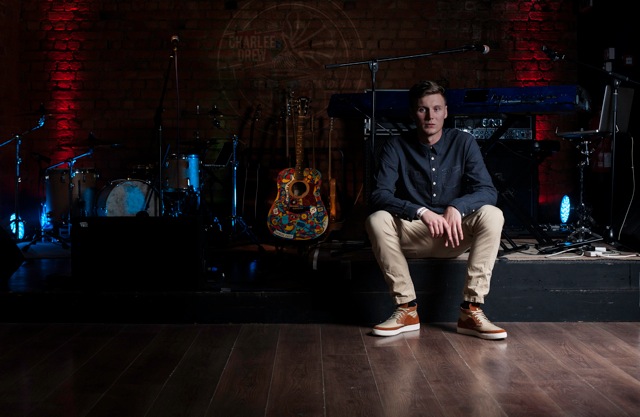 He can sing, he can write, and he can produce. But can Charlee Drew move on from his childhood pet monkey?  Here the rising singer striving for the top talks to Flavour about his new EP ‘Past The Distraction,’ working with actress Sacha Parkinson on his latest single ‘Somebody Else’ and how singing the ‘Neighbours’ theme song helped him discover his music ability.

Can you remember the first time when someone said to you: “Hey Charlee, you’ve got a great singing voice”?

No, but only because I can’t remember exactly when I first started singing.  As far as I can remember, I have always been singing. My mum has told me that when I was younger I always use to sing the Neighbours theme tune to myself. Apparently, I also used to sing myself to sleep.

Are you a fan of Neighbours?

I used to be when I was a kid. But to be honest, I think it was those really hot Australian girls who I was more a fan of [laughs].

How do you define your music?

This is always one of the most difficult questions… I guess it is pop with a hint of soul and RnB.

If one of your fans had the chance to be a fly on the wall in your studio, what would they be surprised to see?

Sometimes my mates come over to chill whilst I’m working, and often I would literally have a piano instrument on loop for hours – most of the time they’ll be saying “Charlee, what are you changing now?”  I’d be like “Listen, it doesn’t matter what I’m changing,” [laughs] I literally spend the whole day tweaking stuff. A three-minute song probably takes me around four weeks to make.

Are you a perfectionist?

At the minute, I’m writing, producing, recording and mixing everything myself. ‘Somebody Else’ that I recently released was co-produced with someone else, but I did a lot of the production on that alone. I’m doing a lot of people’s jobs, but when it’s my own records I get so pedantic that I could spend a long time on one thing and nothing else.

Is there anything in your closet that you’ve held onto for a long time? A piece of clothing or accessory you can’t get rid of?

What’s something most people don’t know about you?

[Long pause] I’ve stopped wearing my caps as I have had to change hairdressers [laughs].

In the video for ‘Somebody Else’ actress Sacha Parkinson plays your love interest. Do you have a thing for her?

Sasha and I have been mates for a few years. I met her, whilst I was on tour with Skepta and we’ve remained mates ever since then.  She is genuinely the loveliest person you will ever meet. She is just so nice, but no there’s nothing going on.

Did she dish out any acting tips?

It was really good working with her. Obviously, because we’re mates, it was also really easy for us to laugh and joke about everything.  That in itself made it a lot easier for me to act around her because she knew what she was doing. I learnt lots working with her.

Ed Sheeran and Skepta have anointed you for success. That’s a good thing, right?

Yeah, of course! I love both of those guys. They have helped me so much. I’m excited.

What’s it like waiting for your new EP ‘Past The Distraction’, to come out?

I’m not. I’m literally still mixing it as we speak. I’ll be dropping a track every two weeks, so whenever one comes out I’ll then start work on the follow up. I mean they are all in their place, but it’s all about finishing them up really.

The single ‘Somebody Else’ —did you write it for anyone in particular?

I can’t even go there [laughs]…Let’s just say that song came from a real rough patch in my life. It came with a good concept, but it also came with it dramas.

Your big break was co-producing Skepta’s recent album ‘Do It Again.’ Give me a good story on the bad boy.

I think people would be surprised as to how much he does himself. He is quite in control of everything he does. He does know what he wants, he really does. I don’t think I’ve got any gossip on him that people don’t already know, or that they should know.

What are the essential items every man should own?

A trimmer for your face, a good aftershave and two phones [laughs]…

What’s the worst job you’ve ever had?

I don’t think I’ve ever really had a bad job. When I left school, I worked in a few venues doing live sound, and I also went on several tours doing the same thing. I later left that job and worked as a booking agent for a bit – everything has always been music-related. Unless, I count the paper round, I did when I was 11 years-old, which was absolutely sh*t.

I would really like to work with Frazer T Smith – he’s got some great records. I also like Professor Green a lot.

Charlee’s new EP ‘Past The Distraction’ will be released April 22. For more info on the man himself click here.