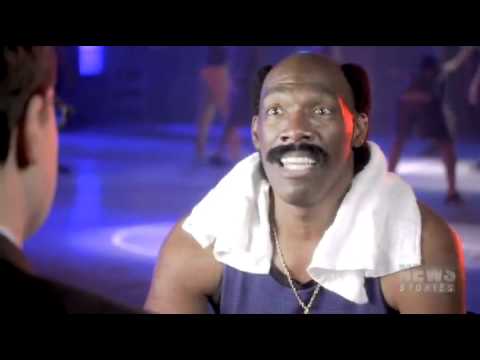 They say that laughter is the best medicine, well actor and comedy sensation Charlie Murphy certainly agrees! He will be serving the UK with a much-needed double dose of hilarity during his European Acid Trip Comedy Tour this autumn. Charlie is on a mission to bring side splitting humour, witty punch lines, and hilarious jokes to the UK where he will take to the stage for his debut comedy show, a show that you simply cannot afford to miss. Not just talented in front of the camera his screenwriting credits include Norbit, starring Eddie Murphy and Vampire In Brooklyn, which he both wrote and produced. At present Charlie is busy in preparation for the filming of his second live stand up DVD, acting as a guest star in several episodes of the TBS’s hit show Are We There Yet? And being a single dad.

Flavour Magazine caught up with Charlie ahead of his tour.

For your ‘Acid Trip’ tour in October what can UK fans expect?
They can expect some Charlie Murphy man! I’m gonna be keeping ‘em laughing.

This is not your first trip to the UK?
No its not, it’s my first trip going there as a stand up comedian though.

What makes you happy?
Pretty much the same things that make most people happy, a sunny day, no bills in the mail! Kids with a good report card, things like that…

When you look in the mirror what do you see?
I see me, I see the same me I’ve been all my life. I see where I’ve got the scars from making mistakes. I’m proud of who I am, and what I’ve been able to accomplish in life. The lives I’ve been able to touch? I’m proud of that. When you have somebody walk up to you and you don’t recognise them, and they say to you ‘I remember when I was in third grade and you came to my school, and you talked to us about life, and that conversation that you had with us played a big role in me going to college and I just wanted to say thank you,’ Come on man. That’s priceless!

How does the title ‘role model’ sit with you?
Not on purpose! I’m concentrating on raising my own kids – I aint trying to raise nobody else’s! Raising your own is enough of a challenge. I’m not trying to be a role model, If you wanna follow me that’s on you, but it’s not my mission in life – to be a role model to anybody, I’m an honest person and I try to do the right thing. I’m in this world with everyone else.

If you show up as the man in white. Somebody’s waiting to throw mud on you anyway. [Laughs]

Tell us what your weakness is?
Oh yes! I’m a man so why don’t you guess what my weakness is? Who impresses you in the world of comedy today?
Several guys out there that are really doing tremendous comedy. Ed Norton he’s one of my favourites. Chris Rock, Kevin Hart – these guys are rocking it man! Russell Peters…I love Bernie Mac as well he was a good friend.

If you could have one wish what would it be?
One wish? Wow. To continue doing what I’m doing, at the level I’m doing it. Being able to travel aboard and touch people. It’s a great life I’m living! The other part to it is that I’m raising kids because I’m a single parent – it’s not easy you know?

Who do you admire?
Right now – no. I haven’t had the time to sit around admiring nobody, it’s like ‘Yo you better get on that grind!’ I haven’t been admiring anyone – I’ve been trying to get admired! I’ve been focusing on making myself better, and making my show better.

If you could choose an actress to be your on-screen wife who would it be and why?
That’s a tough one, there’s a lot of fine women out there right now. That’s a real tough question.

I don’t wanna answer that because I’m thinking my answer may sound clichéd – it may be the answer that everyone else answered! I’ll just say – I would rather be playing a sheik – that way I could have all of them in one movie as my heir. I wanna play that Laurence Olivier role, 40 thieves of Baghdad – I’ll do that movie over again and have all the women that I like!

What’s your favourite chat up line to a lady?
No… No that’s corny man! I don’t do nothing that you see on television, the stuff that you see guys do on TV, when you do it in real life – you’re gonna feel like a jerk, I don’t understand that. You see them do it on TV! So what’s original about you doing it?

I would never sprinkle rose petals on the floor and think that’s sexy? I’ve seen that in about 50 movies! Are you really being sexy? Really, why don’t you put a towel around your neck and put some underwear on shout superman and jump out the window! [Laughs]

Real life is not a movie. If you doing anything they do in the movies – you should be slapped!!! [Loud laughter]

What your favourite dish to cook or eat?
I eat a lot of lamb. I like Greek food. Cous cous, basmati rice – I love all that kinda stuff.

If you were invisible for a day what would you do, and where would you go?
The ladies changing room down at Macy’s – in Nordstrom! [Chuckles]

Nah I probably would go to the White House – and listen to what’s really going on. Just go to the cabinet meeting and sit there to listen to what they’re really talking about. And then come back visible again! [Mischievous laughter]