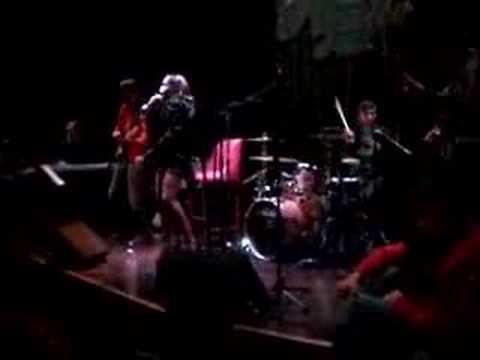 Many artists come out the studio with hits. Voice synthesizers and futuristic beats can propel a somewhat mediocre track into a number one hit, but that same hit that is heard through the speakers isn’t always rendered when we hear that particular artist sing live.

But that isn’t the case for London born, Cherri V as she had the crowd on their feet all night at her launch party at Ruby Lo this week.

Describing her music as a ‘mixture of RnB, rock and pop melodies with a provoking piece of Cherri on top!” the talented singer provided a pleasant display of live music its best.

Her most notable track, entitled ‘Fast Car’ is a well documented tale of a guy who drives a fast car that thinks he can do and say as he pleases. The rocky upbeat feel worked wonders with the crowd; every snare sounded that extra bit sharper due to the tenacity of her band, coupled with Cherri’s strong vocals ‘Fast Car’ was the most noted track on the night.

As Cherri and her band rocked on through the night, those in attendance were also able to catch a glimpse of the vocals that saw Cherri catch the eye of hit producers Gnarls Barley and Soulshock and Karlin.

Putting a halt to her band the crowd were left in awe of Cherri and her vocals as she sang acapella which was received with a full applause by the crowd.

Her confidence didn’t stop there as she covered Lenny Kravitz’ ‘Fly Away’ which was another notable track that went well with the audience.

Her fusion of pop and rock stems from her childhood she says, “I loved music as a child, I used to flick through MTV and The Box and i used to listen to everything from hip hop to RnB to Alanis Morisiette”.

After coming out a group situation Cherri said “I felt like I have to take a chance, I had to” which now sees Cherri in more control to write and sing her own music under independent label 6060 music group.

If you’re wondering what the ‘V’ is for Cherri plans to keep you guessing but what’s known for sure is that there is more to be heard from this talented artist.