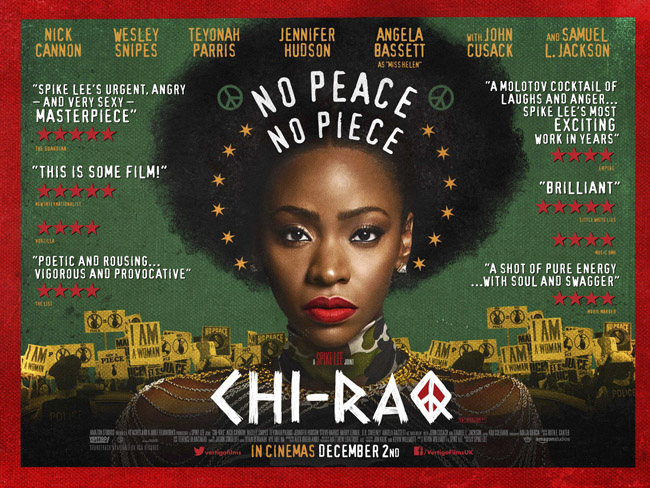 It’s been a fair few years since Spike Lee has created anything of any note; a filmmaker who is known for his controversial social and political stance brings his filmmaking prowess in what is probably his finest piece of work in some time with Chi-Raq.

Films don’t come much sexier, politically fierce and layered with feminism as much as Lee’s Chi-Raq, a film dubbed as being a musical with a very angry and loud message, one which hears ‘no peace, no pussy’ ringing loudly from the women of the streets of Chicago who have seen enough black on black violence and murders. It’s certainly different to anything we would have seen in recent years and sticks with you long after, I for one took a very long time to decide if I actually liked it or not.

Our female lead protagonist comes in the form of breakthrough actress Teyonah Paris with her stylish oversized afro bringing not only the sizzling sex appeal but proves just because she looks damn fine doesn’t mean she hasn’t got a brain too and she knows just how to use it. Refreshingly burying the movie stereotypes of if she looks hot she has nothing between her ears.  Teyonah plays Lysistrata, the girlfriend of prominent rapper Chi-Raq (Nick Cannon) and gang leader of the Spartans. The Spartans main beef is against the Trojans and its leader Cyclops (Wesley Snipes) – yes you guessed it this film has a modern day twist on an old Greek mythological tale – one which sees an innocent little girl murdered by a stray bullet bringing the tensions to an almighty head.

Chi-Raq packs a mega punch as soon as it starts with Nick Cannon as Rapper spouting out his lyrics which are blazoned across the screen along with statistics that murders in Chicago outnumber those of Iraq. Samuel L. Jackson plays a visible narrator popping up in his sharp yet outlandishly coloured suits as a lyrical reprise between chapters. Jennifer Hudson makes a great supporting appearance as the grieving Mother of the murdered child. We even have a white preacher in the form of John Cusack addressing the politics of the streets at any given moment.

With tensions high, Lysistrata’s home is set alight, with nowhere to go apart from her intelligent neighbour’s Miss Evans (Angela Bassett), spending the night with this woman open’s Lysistrata’s eyes that the women hold the power to make all this violence stop. Teaming up with the women and girlfriends of both gangs they come together as one to withhold sex from their men until peace descends on the city, with each scene broken down into a musical number to really ram home its preaching message, that’s one of its major flaws along with its 2 hours 7 minutes running time which simply isn’t needed.

Pair the powerfully poignant and aggressive performances with a soundtrack that appeals to the generation of kids this is aimed at – which features tracks by Cannon himself as well as R. Kelly and Jhene Aiko – Chi-Raq could be Lee’s best work to date.