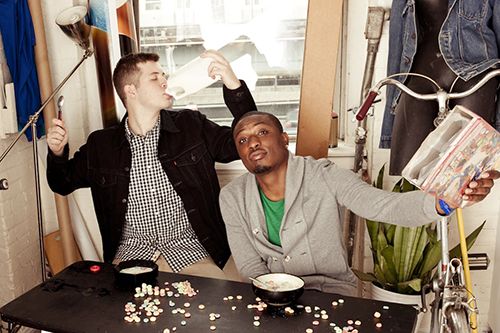 You can’t get more random or in your face than Chiddy Bang. From their style of music to their colourful and boisterous nature, these guys were born to excite and entertain as much in person as they do on the airwaves. Their fresh and alternative approach to hip hop, coupled with a witty attack on the mainstream music world brought them much attention

in 2009. Three years and one record deal later, their album Breakfast
has stormed the UK charts. Flavour catches up with the rap duo and soon learns a formal, structured interview ain’t gonna happen…

The room at the EMI offices in Kensington, London, feels like a plush penthouse suite in Ibiza, as we wait for Noah and Chiddy to arrive. It’s beautifully decorated in light and airy colours, with a patio balcony, and exudes a chilled atmosphere… That is, until the two Philadelphia natives come crashing through the door.

Accompanied by an average-sized team, consisting of manager, Chiddy’s sister, publicist and another gentleman (with no clear job title), they enter the room in a sea of chatter, laughter and high jinx. Amid

the banter they get acquainted with the surroundings, looking in places most wouldn’t usually look and touching things they really shouldn’t.

It takes a few minutes before the room is quiet and we can get them to sit down, in the same place, at the same time. Just before the first question gets a look-in, Noah picks up the M&S orchid on the table in front and asks, ‘What the fuck is this shit? I can’t see anything.’ He places it neatly on the floor. The chatter kicks off again and it’s a couple

of minutes before we can begin discussing how their career began.

‘I was a Music Industry major (it’s a very vague subject). We would sit in the back of the class, like, this is the most boring shit of all time,’ Noah says with disdain. ‘I met Chid, and we started making tunes and putting them on the Internet for free. We got signed in March 2010. We did one mixtape and kind of half a mixtape before that, and then went straight into the deal.’

It’s not the easiest thing in the world to tell your folks you are dropping out of university to pursue a career as an alternative rap duo. However, after some deliberation, both sets of

parents were finally able to give their blessing to the boys. ‘My parents convinced me,’ laughs Noah, adding, ‘Chiddy had a much trickier time…’

‘My parents are Nigerian,’ Chiddy explains. ‘So they are very, very traditional. They want you to be a lawyer or doctor… that kind of stuff. They always knew of my love of hip hop and they really could have seen it coming – I’ve been rapping and bothering them about it since I was, like, 14, 15. When I was 16, my mum paid for my studio time and drove me to the studio. I think, at the end of the day, they just wanted what they thought was best for me. They always supported me too. I can’t really complain.’

This is the one time throughout the course of the interview where the tone becomes quite serious and the passion behind their music is clear.

‘We both decided to go to Drexel University in the fall of 2008,’ says Noah. ‘We were 18 years old, we were “freshers”, as you guys call
it – we didn’t get to rave or do any of the cool stuff you guys do, though. People forget the drinking age over in the States is 21, so being a fresher in the United States is very different. For one thing, unless you have a

“the birds were singing and i thought, i want to make a hip-hop duo”

scholarship, like we both had, you are paying a ridiculous amount of money, so we decided to find our own fun.

‘In our school, they let you focus on the legal or the business or the engineering. So I chose the engineering. I was living in the studio: I would sleep underneath the desk and get up in the morning and just start working on stuff.’

Chiddy adds, ‘I was at college, but I wasn’t really interested in being there. Basically, when I applied to Drexel I found out there were multiple studios on campus, and I’ve always rapped since I was very, very young. I realised that the music industry kids, like Noah, had access to the studios on campus. I was of the mindset that I needed to find an industry kid that would allow me to get into the studio. That was my focus. There was a kid who stayed next door to me and he was a music industry major; him and Noah were classmates/homies. I hounded them every day.’ Two kids at college, but not digging college, then decide to ditch college for music. Is this the basis of the Chiddy Bang story?

‘Well, one morning,’ says Noah, ‘I woke up, and the sun was shining and the birds were singing, and I thought to myself, today I want

to make a moderately successful alternative hip-hop duo. And then… I went outside.’ [Laughs]

Being pigeonholed as ‘alternative hip hop’ is one thing, but is there
a common misconception this classification is more intellectual or meaningful than regular hip hop? What do they think of this label?

‘That just shows how people are so closed-minded in regards to what hip hop has the potential to do,’ answers Noah. ‘If you call us alternative hip hop, it’s because you are used to a certain kind of thing. I don’t think either of us listens to what you would call “alternative hip hop”.

‘We listen to Gucci Mane and 2 Chainz! I think that kind of notion just ends up hurting the fans more, because the fans who feel a certain kind of way will either listen to you and not question it, or they will not listen to you and not question it. Either way, you want people to give you a listen. If it’s for you, like it; if not, don’t like it. All the labels like putting names on genres so people don’t have to listen to it. It’s like, oh, yeah, it’s in that world. You either accept that whole world or not.’

Chiddy adds, ‘Then you see us as outside of that, so we are classed as “alternative”. Chiddy Bang is what happens when you take someone who is just straight hip hop, and you mix it with someone like Noah, who has the quirky production and a very wide-based understanding.’

Their combination of ‘straight hip hop’ and ‘quirky production’ seems to have worldwide marketable appeal. But how interested are they in taking over the world? We’ve heard them say in several interviews they don’t really care if people buy their music or not…

‘I think we do care if people buy our music,’ responds Noah, ‘but we totally understand if they don’t. We are part of the generation that has been pirating music for quite some time. It would be hypocritical of us to be, like, yeah, buy our music and support us.

‘At the same time, I have two little brothers who will never know about the concept of exchanging money for music. When you have a generation that thinks that way, you can’t lock them all up. You can’t criminalise

an entire generation on how they’ve come to interact with the technology available to them. We need to start thinking of new ideas instead of trying to criminalise everyone.’

Chiddy agrees. ‘I understand people aren’t going to buy music. When our album came out, I went and bought a physical copy of Breakfast and that was the first physical CD I have brought since 2003.’

With a huge fan base booming and world domination at their fingertips, it seems all eyes are on Chiddy Bang. Where many artists might crumble at the thought of such pressure, this hip-hop twosome don’t seem to be the crumbling types…

‘We’re 21 years old,’ says Noah, ‘we’re going to be making music for a long time, so to feel like everything is resting on this album is a bit silly.’

Chiddy says, ‘Personally, I think we’ve exceeded our own expectations, so at this point it’s like… the album is out there now.’