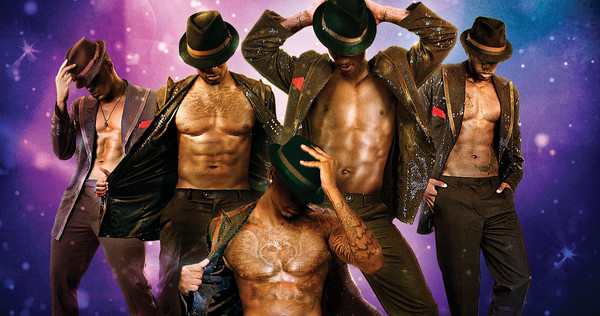 Chocolate City is here. Every now and again we ladies are in need of some light relief and over the next couple of months this is coming in the form of the male stripper on the big screen.

I can hear the cries of men everywhere as they start to spout off “woman are first to complain about objectifying women blah blah blah”.

Suck it up fella’s, after years of being subjected to scantily clad “perfect” woman in movie land, it’s now our turn to get a cheap thrill and drool over the fine specimens of the male species. Our first outing of the season comes in the form of Chocolate City and DAMN this is so hot it sizzles.

Michael (Robert Ri’chard) a.k.a. Sexy Chocolate decides to take a job offer from Princeton (Michael Jai White), the owner of the hottest nightclub around, which also just so happens to be a strip club in order to raise money to help his struggling family. Michael becomes an instant hit with the ladies at the club and soon becomes a featured favourite ousting out at first Marcus (Darrin Dewitt Henson) from his spot and then the extremely delectable Adrian (Tyson Beckford), making him public enemy number one. Not only does he have to cope with the pressure of his new found fame but also starts to struggle in keeping his secret from his family and girlfriend.

OK, so the storyline is pretty predictable, young man is tempted by the big bucks, has to keep a secret from his family, he gets found out by the girlfriend and gives up the stripping in order to save his relationship with the girl. It has to be noted, and we have to make the comparison with the first Magic Mike film here, it’s actually a lot more compelling and keeps you watching. The problem with the first Magic Mike was all the hot bodies and stripping came in the first half of the movie, then they brought in the story in the second half which actually was boring and killed the mood of the audience. Chocolate City has obviously taken from this mistake and kept the exotic dancing popping up throughout the film, to the very delight of this reviewer.

There will be many a comparison with Magic Mike, and it will be called the Black Magic Mike, in our recent interview with Michael Jai White he admitted this was intentional. Another plus for Chocolate City is the choreography, whilst Channing is a great mover, the dancing from rest of the cast in Mike left a lot to be desired, whilst every single half naked actor in Chocolate City could move and they were not afraid to show it either. Whilst we don’t have the pleasure of seeing these guys get naked, they really don’t leave much to the imagination, some get down to their underwear and love to grab their crouch, just giving the slightest hint of what may be hidden underneath. The nearest we get to full nudity is in the first twenty minutes (don’t quote me on that I wasn’t really paying attention to the time at this point) when Tyson Beckford pulls down his underwear and we get a full on view of his very pert behind, from this moment on you may need to left your jaw of the floor on many occasion.

The soundtrack is pretty decent too, and with a small role from Ginuwine as Pharaoh, his song “Pony” gets a feature on a number of occasions, We also have “Don’t Tell ‘Em” by Jeremih ft YG. In these films soundtracks are always so important and the choice of the wrong songs can make or break a scene mood. This soundtrack does not disappoint and certainly delivers as much as our half naked actors.

This is not a classic film by any means, but it is a hell of a lot of fun which leaves you immersed in entertainment succeeding in its aim to be the Black Magic Mike and actually surpassing anything that Mike had to offer. Ladies get your girls together to watch this, your all going to need to support each other by the end of the film after all the excitement wears off you’ll feel like you’ve been hit by a truck.

Chocolate City is available to download from itunes: http://po.st/DLChocolateCity