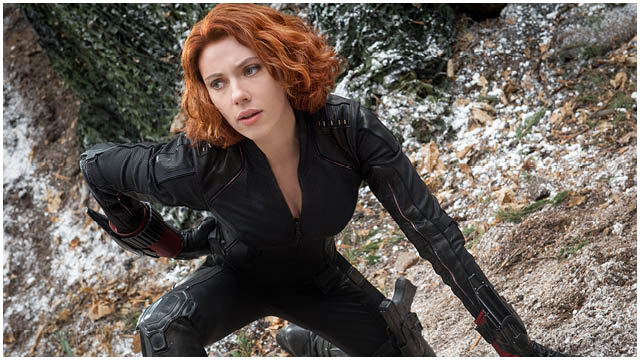 To celebrate the 3D Blu-ray™, Blu-ray and DVD release of Marvel’s Avengers: Age Of Ultron this week, we talk to Chris Hemsworth, Scarlett Johansson, Elizabeth Olsen and Robert Downey Jr. to discover their thoughts on the action-packed adventure…

What’s new about your characters in Marvel’s Avengers: Age of Ultron?

Chris Hemworth: In Age Of Ultron, we see a more grounded, earthly version of Thor than we have in the past. It is nice because there are a few more opportunities to showcase some humor and see him in some casual gear instead of the red cape and armor.

How would you describe The Avengers at the beginning of Marvel’s Avengers: Age Of Ultron? And how has the world changed since the first movie?

Scarlett Johansson: It really is business as usual at the beginning of the film, but the world is aware of the universe in a way that they weren’t in The Avengers. The common man knows the vocabulary of aliens and space travel. Before the battle in New York, The Avengers had a stealthy approach and S.H.I.E.L.D. certainly had that as well – but now we’re being judged in a different way. Everybody is watching us, so it’s a different playing field.

Where is Tony Stark when Marvel’s Avengers: Age Of Ultron opens? And how would you describe his relationship with The Avengers now?

Robert Downey Jr.: When the movie starts, Tony is hosting The Avengers in his tower in New York. He’s working on a system that will make it so The Avengers don’t have to do what they’ve been doing all along, which purportedly should be the end game.

How does it feel to be new members of The Avengers?

What’s Thor’s role in The Avengers in the new movie?

Chris Hemsworth: He’s a central part of the team now and there’s certainly a unity that they’ve all formed now as a group. They are solid. Thor sees the bigger picture of the current conflict that’s going on. There’s the initial battle, which they’re all involved in, but Thor uses his Asgardian knowledge and starts to tap into some otherworldly possibilities and threats that he thinks are coming.

How would you describe the romantic relationship that develops between Black Widow and Bruce Banner in the movie?

Scarlett Johansson: These characters have what I always thought was an unlikely love story that grows between them – but it’s actually rooted in a very likely love story because they have a lot in common. It’s a very complicated relationship. It’s an impossible love that seems unlikely but isn’t.

Why does Tony Stark care for The Avengers so much in the movie? In the past, he has been a pretty selfish guy…

Robert Downey Jr.: By having them all together, he feels like it allows him to still be the engineer and the mechanic who wants to help them all do things a little bit better. It’s like buying a football team and then wanting to redo their uniforms and give them better equipment and make them stronger, faster and safer on the field.

How did you physically prepare for the magical elements of Scarlet Witch?

Elizabeth Olsen: Joss [Whedon] wanted me to work with a dancer and wanted to add a new element of fighting without punches. Then he met Jenny White, who’s my movement coach on this movie. Together, she and I created these movements that worked for me and worked for Joss. It was a lot of work and it wasn’t until the second half of the shoot that I felt like I could improvise with it. It’s not random and it’s not something you’ve seen before – but it was born organically, which is really cool.

THE BIGGEST SUPERHERO FILM OF THE YEAR IS OUT NOW ON 3D BLU-RAY™, BLU-RAY AND DVD