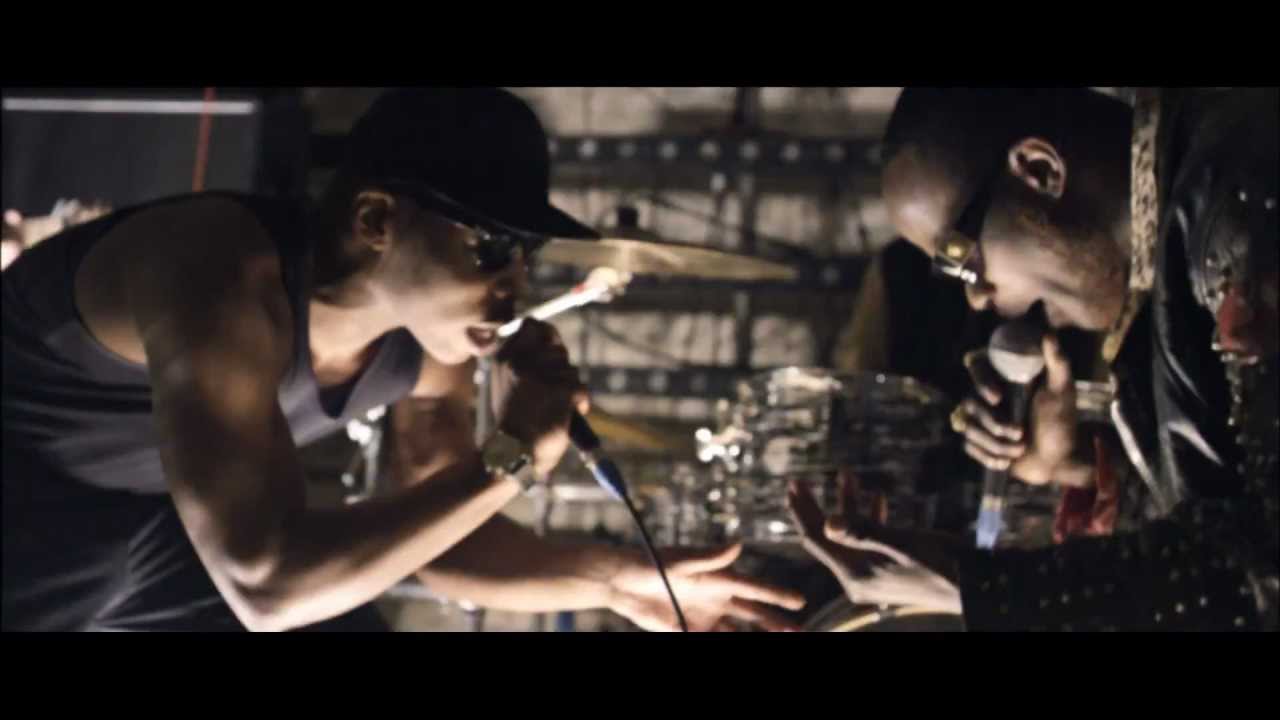 Meet rapper Clement Marfo, who has been making waves as an individual on the underground grime scene. Then there’s the band: you have vocalist Kojo, Dion-on drums, Johnny on bass, Rich and Dan on guitar, and the only female, Stacey, on keys and vocals. Collectively their sound is unique, uniting hip hop with grime, rock and pop. They have been together for three years, playing shows on the underground circuit as well as supporting Example, Plan B and Florence + the Machine. Now 2012 is set to be their year, to be at the forefront. Flavour meets Clement Marfo & The Frontline to talk fusion, concrete and Captain Kirk… So, can Clement Marfo function or exist without The Frontline, or The Frontline without their frontman?
CM: That’s a good question. I was a hip-hop MC before this, and a mutual friend hooked me up with Dion, and Dion knew other musical people and recommended them to me. Everything just came naturally; and I swear, if I wasn’t with the band, I don’t think I’d be in this position.
Dion: As a band, instrumentally we can hold it down, but this dude’s stage presence and energy is amazing. We bounce off each other. If any of us out of the seven wasn’t there, it just wouldn’t feel right.

Your sound has been described as a fusion of grime, hip hop, rock, pop and R&B – is that how you’d put it?
CM: The thing is, you can’t put us in a box. There are seven of us with different backgrounds. Dion’s into his rock, I’m into hip hop, Kojo’s into soul, Stacey’s into pop… there’s different aspect of things. We can cross genres. I would say hip-hop rock. We borrowed those elements and incorporated them in our music.
Do you think by mixing up all these genres it unites today’s youth?
Dion: I’d say so. I’ve met people that are strictly grime or strictly rock, and the two worlds just can’t understand each other. I feel as a band, hopefully we bring it all together. Kano did ‘Typical Me’ – that’s when everyone started to go, ‘OK.’
CM: People are borrowing elements. I think we’re in this generation where it’s not like your jazz, your hip hop, your pop; everything’s mixed around. When you come to our show there’s a wide demographic; there’s kids, adults, teenagers, black, white, Asian people. It appeals to everyone, not because of the music, but because of the seven figures you see on stage.

Does having so many creative individuals within one entity often lead to creative differences?
Dion: No chance.
CM: Were a family. I wouldn’t say not a chance.
Dion: No, because I feel like…
CM: We’re having a dispute right now… [all laugh]. It’s the quality control, everybody puts a contribution in, which is positive. It’s not like, ‘I want this in because I’m a rock guy.’ We all sprinkle our ingredients on it to come together. I’m the frontman.
Dion: Captain Kirk.
CM: There always has to be someone who makes the executive decisions, in a way. You’ve also got to listen, and the guys have got so many valid points, it makes you think outside of the spectrum.

How do you begin to make a song, with so many of you involved?
CM: There’s two ways: One is where a producer might come up with a little snippet of a beat and we kind of loop that and put an instrumentation of that. Or we go in a rehearsal studio or a sound check, for example, and come up with a natural jam.
Dion: We’ll go into a rehearsal room and start jamming and doing our thing, and Clement will come out with some screenplay, he’s very visual.

Tell us about your latest single ‘Overtime’. What has the reaction been so far?
CM: This is the first step in the door, I think. With this track we’re here to set a mark and the response has been crazy. It’s No 2 on the MTV Base Chart, and Radio 1, 1Xtra have all been supporting the track, and it’s got us MTV Brand New for 2012. The track is about nobody works harder than us, it’s about work ethic – in order to get where you are you have to work harder than the people around you. Someone like Ghetts, his work ethic is crazy – every year he’s got singles, mixtapes, collaborating – he was perfect for this.

Your second single ‘Mayhem’ is out in March, so tell us about it…
CM: We’ve had this track for a year and a half now. We knew it was going to have some heat on it, because when we did it on a few shows it gets the crowd hyped. With Kano on it, he just added an extra something.
Dion: He just swagged it completely.

Clement, how do you feel about other MCs on a track, being the group’s rapper?
CM: I like collaborations; I think it helps us as a campaign and as a product. People want to hear a great UK legend on track. If it was any Tom Dick or Harry, I’d be like what’s this?
Dion: For me, if you can bring it…
CM: It’s a very competitive field and it steps my game up. It’s great because these guys are inspirations to me and it feels like I’ve worked hard to be on stage with guys that I’ve looked up to. What was the track that you feel first got you guys noticed?
Dion: It has to be ‘Champion’.
CM: Yeah. We wrote the song on the day of David Haye’s fight – we wanted an entrance theme, that was the inspiration for it. The day we recorded it, I remember the producer was like, ‘This is it, this is a hit.’ Then A&Rs started coming to our shows: Warner came, Sony came, EMI, it was like, woah, crazy! So after a few months we were offered a contract with Warner Brothers; it was like, damn, massive major label!
Dion: That was one of the best days, but we didn’t want to get gassed.

How long do you think it takes to create an underground buzz?
CM: You can’t blow in six months; you can’t blow in one year.
Dion: You just can’t do it like that.
CM: There are ways, though; with the likes of YouTube you can have one song and blow up. Everything takes steps – you can’t run before you can walk. We’ve been together maybe three years and I believe that’s how long it takes. You’ve got to build a foundation, get the concrete, make sure everything sits perfectly and then you can start building.
Dion: You need to be going out and tearing shows to pieces. I think what’s worked for us is we like to go out and talk to people after shows and just hang out with them. If you want to keep them on board, you have to give them something to remember.

You’ve worked with many great artists. Who’s been your favourite?
Dion: You could ask each member of the band and everyone’s got a different answer. For me, I feel torn, because Ghetts’ energy on stage is incredible, and then Sway, when he came down and I heard his verse, it was just like incredible.
CM: Ghetts matches our energy, and I love that. Sway adds a polish and Kano adds a package full of swag.

What’s the nicest thing a person in the music industry has said about your music?
CM: Mike Skinner from The Streets, we did a gig with him at the Freeze Festival and he said, ‘Keep doing what you’re doing, because you know what it is, I’m not going to make your head big, but you guys are the future.’ This is Mike Skinner, he’s sold millions. ‘The future’, that makes us feel amazing. He’s an icon, a legend.
Dion: There was a session drummer, Ginger his name is, he came down and saw the set and said, ‘That was incredible.’ For me, from drummer to drummer, that was just beautiful.

What can we expect from the forthcoming debut album?
CM: We’ve written 60 songs; I know in the back of my mind there’s eight songs that I want on the album.
Dion: We’ve all got our lists of what we want; because there are seven of us we need to get a shortlist.
CM: Expect something like ‘Champion’, big energetic hooks, full of instrumentations; we’ve got two guitarists so it’s going to be a very rock/hip hop/pop album. It’s out this summer, just before the Olympics.

Is 2012 going to be your year, we expect great things from you?
CM: I wouldn’t like to say yes, 2012 is our year, because I might jinx myself or underachieve.
Dion: I think it is; the momentum at the minute is building, and if we keep going how we are, then yes.