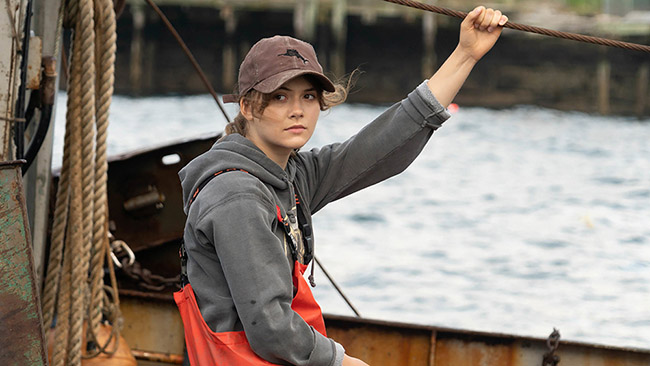 Writer/director Sian Heder’s Sundance award-winning film gives a voice to the hearing impaired in this charmingly quaint movie of one girl’s plight of juggling life with her deaf family and the desire to spread her wings and fly the nest.

Emilia Jones takes on the role of 17-year-old Ruby, a teenager with the weight of the world on her shoulders. Not only does she get up at the crack of dawn every day to help her deaf Father and Brother – who can’t negotiate a good deal if it came up and slapped him in the face – with their flailing fishing business she also has to pack in a full day at school in there somewhere too. Ruby, has been a Coda all her life, born to deaf parents she has become the family interpreter.

Like most teenage girls, Ruby develops a crush on a boy at school and just to be near him, she signs up for the singing class, a class that surprisingly showcases the amazing voice she has. Aided by her pushy yet supportive teacher (Eugenio Derbrez) Ruby’s dream of getting into a prestigious music school becomes a possibility but she is torn between her family, who rely on her for everything and her own independence.

Whilst Coda is enjoyably understated and thoroughly enchanting it doesn’t mean it is in no way formulaic and it raises the question of whether certain tangents in the story had been fully rounded out but cut in the editing process, but just for the sheer joy it brings, I for one will give this a forgivable pass.

The film is released in Cinemas and on Apple TV+ on 13 August.