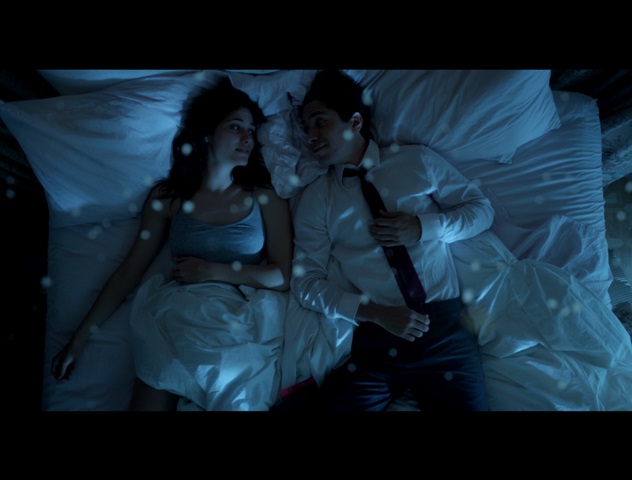 With the release of Comet, starring Justin Long and Emmy Rossum, in cinemas today, we have a brand new clip from the film before you venture out into those cool auditoriums. Give it a watch and check out the review too.

Love has no bounds, it travels through space and time and Comet screams this, giving us a deep and serious look at pessimistic and totally irrational behaviour that crosses alternating dimensions.

Dell (Justin Long) and Kimberley (Emmy Rossum) have been in their relationship for six years, Set in a parallel universe Comet explores their relationship over five critical moments of this relationship, jumping between each moment to tell this story.  Although Dell was the one to chase Kimberley when they first meet, over the years he ultimately causes the downfall of their relationship with his lack of commitment towards their future together but could this all be just an act and will their love stand the test of time?

First time feature director, Sam Esmail has given us a visual delight in Comet, whilst this parallel Universe isn’t too dissimilar to ours, the soft tones of the colours used to create that atmosphere of another world fits perfectly with its storyline, One minute you will believe this is set on our earth but the next you quickly reminded this is taking place in another dimension.

Even though this is a strong storyline, the one annoying thing which will no doubt give you a bit of a headache is the constant jumping back and forth between the five different periods of their relationship. One minute we are witnessing their first meeting waiting in line to watch a meteor shower at a cemetery, even though Kimberley is there with her current boyfriend, Dell instantly takes a shine to her and unashamedly asks for her number. The next we jump ahead two years into their relationship, in a Parisian hotel room just about to attend a friend’s wedding, Kimberley starts to get frustrated with Dell and his lack of enthusiasm surrounding their own future. This carries on throughout and does make it a little confusing at times.

Comet also has a subtle and gentle humour splattered all over the film and Justin Long as Dell seems to be the perfect actor for this role. We couldn’t actually see any other playing Dell, he just seems to ooze and live this character, he makes it so believable, it was like the role was actually written for him. Emmy Rossum as Kimberley was less believable, but they seemed to make it work for them. Long certainly stills the limelight.

Comet is slightly confusing but with a gentle yet strong story and well written script you’ll most certainly be transported to another dimension.

Comet is out in Cinema on the 3rd of July.