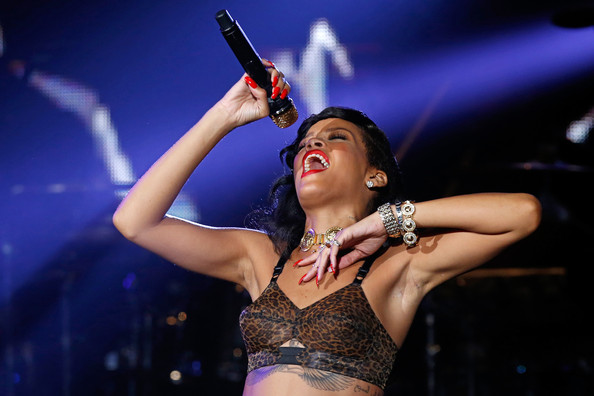 Despite arriving on stage over an hour late the atmosphere at the HMV Forum, on Monday night, was one of anticipation and excitement, for what everyone knew was going to be the gig of the year.

With rumours of mid-air revolts, 24-hour partying and journalists streaking on board of the Boeing 777 jet plane for Rihanna’s 777 tour, things are sounding pretty chaotic but on stage at the usually rocky North London HMV Forum, on Monday night Rihanna was remarkable, glamorous and polished as ever.

As the lights dimmed and images started to flash on the screen Rihanna arrived wearing a jaw-dropping leopard print bralet and a white haram pants suit, designed by University of Westminster graduate Ashley Williams, that showed off her toned figure.

Opening with Cockiness and Birthday Cake the pop starlet – whose seventh album Unapologetic was released this week, confirmed why she is the world’s biggest superstar as she treated the crowd to 90 minutes of non-stop hits, fantastic sexy dancing and distinctive vocals.

The Bajan hitmaker performed older material such as ‘Unfaithful’ and ‘Take A Bow’ but when Rihanna delved into dance favourites ‘Only Girl In The World,’ ‘Where Have You Been?’ and Calvin Harris-produced ‘We Found Love the party really started.

Diamonds glistened, Um-brella prompted a singalong, and when a shower of confetti rained down as We Found Love closed the show, Rihanna really had taken the crowd.

Cockiness
Birthday Cake
Talk That Talk
Wait is Over
Man Down
Only Girl (In the World)
Disturbia
S&M
Phresh Off the Runway
Unfaithful
Take a Bow
Hate That I Love You
Where Have You Been
What’s My Name?
Run This Town
Live Your Life
All of the Lights
Diamonds
Umbrella
We Found Love

Thank you to HTC