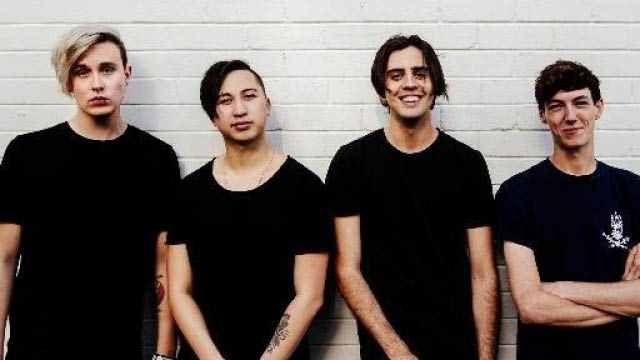 Can you tell me about your album ‘Better Weather’?

J- Better Weather was written over a year ago, it’s about the things we were experiencing and what our friends were experiencing. I think we done something good, I’m really stocked on the way it’s turned out! We’ve got a bunch of themes on the album!

L- It wasn’t a conscious decision, There’s a lyric in a song called ‘Voldemort’ “despite the weather, it get’s better”, I think that really shows what the whole album is about!

L – It’s very hard to narrow it down to three words but I would describe our sound as fun, emotional and catchy

J- Lately I’ve been really enjoying playing ‘higher’ because it’s a new song and it’s very fresh for us and the crowd seem to really love it!

L- we’ve been very fortunate with the response, we dropped that track a couple of weeks ago and we were on tour with As It Is, we played that song for the first time and we didn’t know what to expect! The song had only been out for 16 hours and the people in the crowd who were already singing the words back to us. It was a really cool feeling

What was it like touring with As It Is?

L- Amazing! Those dudes were some of our best friends!

J- we toured with them last year in Australia and we just hit it off straight away which I guess is why we got to do the UK tour as well, it just made sense and the tour was so fun.

What’s the most important thing that you’ve learnt as a band in the past year?

J– the other day I tried to do a jump and fell over, that was a couple of weeks ago! I must have looked like a weird grasshopper thing; it was a disaster!

L- Same thing happened to me on the As It Is tour, I jumped and fell straight on my arse; I got straight back up and carried on! It’s basically just falling over on stage because we have a high-energy show and we liked to jump around.

J- one time I actually fell off stage and it was right as we were walking on stage; I sprained my ankle

L – We are back over in the UK and Europe in December for tour and we are trying to squeeze a few things in between those dates.  We will also probably drop a new music video or two.