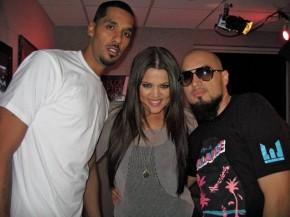 Multi-platinum Grammy nominated producers Cool & Dre who have produced hits for such A-list acts as Lil Wayne, Linkin Park, 50 Cent and Queen Latifah, went on the Khloe Kardashian Radio Show “Khloe After Dark” Y100 FM Miami on Saturday March 13, 2010 for a segment set to air on E! for the new season of Khloe and Kourtney Take Miami.