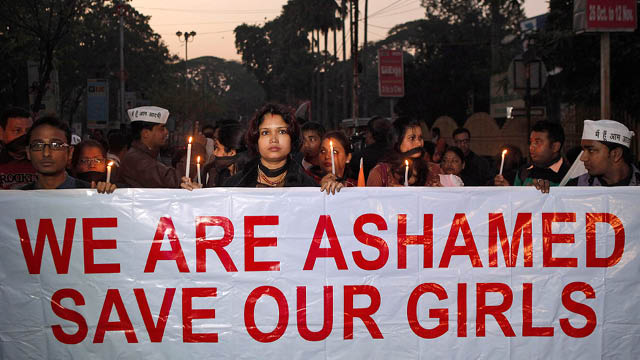 This week, saw the launch of the #HerVoice campaign; an initiative led by Snehalaya UK Secretary Miranda Hudson and British journalist Jenn Selby, which aims to raise awareness of the atrocities perpetrated every day, against women and young girls in India.

The campaign, supported by 8 non government organisations and brought together by GlobalGiving, calls upon the Indian government to strengthen laws for a sustained change, aiming to abolish rape culture and gender-based violence. In September this year, two sisters from the Baghpat district, Uttar Pradesh, became headline news across the world. Aged just 15 and 23, they were sentenced to rape by a Knap Court and paraded naked through their village, their faces blackened, as punishment for their brother having an affair with a married woman from an upper caste. Although these Knap Courts are illegal, local politicians and police turn a blind eye, meaning NGO’s, like the 8 fronting the #HerVoice campaign, are often the first and only emergency service for women and girls, suffering from such violence. Last year, 1,500 acid attacks were reported worldwide – alarmingly, 1,000 of these were in India and over 72% were against women. A woman is raped every 34 minutes, and is murdered every hour over her dowry. Gender-based violence isn’t just India’s issue, but with the sheer number of cases being swept under the carpet, it’s a good place to start in putting women’s equality and safety at the top of the agenda.

The stories being reported as part of the #HerVoice campaign are truly horrifying; from premature infants being dumped in public toilets, to a 15 year old mother forced to give birth after being raped by a taxi driver, whilst trying to escape her father who had sexually abused her as soon as she hit puberty. Journalist and #HerVoice campaigner Jenn Selby commented, “I’ve been stationed out in rural Maharashtra and Mumbai as a reporter for only a week, speaking to police chiefs, ministers, human rights lawyers, survivors and activists about rape culture in the country. It quickly became clear to me that while culture differs from place to place, the reasons why rape happens is predominantly the same. It’s about power and control; a sick message to the rest of society that these men are to be respected, because of their status over women. Or simply that they consider women to be objects to use and discard, just as they would an old shirt.”

“In India, the problem of sexual violence is amplified” Selby continued. “A woman is raped every 34 minutes. I am a survivor myself and am heartbroken by seeing countless girls – some as young as three – being made to feel like they are worth nothing. We owe it to the women of India as human beings to take a stand for them now and to give India back #HerVoice. Without gender equality, the world’s largest democracy can never progress.” During the month long campaign, there will be three events to raise awareness: a peaceful protest in the form of a Twilight Yoga Vigil, a protest at Wembley Stadium during Modi’s visit to the UK, led by Director Leslee Udwin, who’s film India’s Daughter about the 2012 Deli Gang Rape was banned in India, and a panel debate hosted by LSE on rape culture in society, and how education can re-shape gender equality.

In addition to the work taking place in India, the campaign is driving awareness online through social media, requesting that people worldwide use their voice by signing the petition to India’s governing bodies and by posting a selfie, containing a message of support and the hashtag #HerVoice.