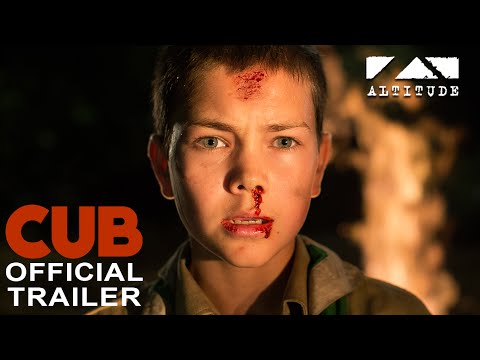 If you want to experience a film that feels a little more authentic, you really need to start exploring our “foreign” films. Yes, we may be subjected to having to read the subtitles but there certainly is something more enticing when it comes to our European filmmaker’s creativity.

Cub follows the story of 12-year-old Sam (Maurice Luijten), a vulnerable boy who has had a volatile background. Sam heads off to camp with the rest of his scout troupe, but with only one friend in camp and extremely despised by pack leader Peter (Stef Aerts), Sam feels like an outcast. After discovering a strange secret lair he becomes convinced a horrible fate lies in store but when he tries to warn the others no one takes him seriously, which, of course, adds to the atmospheric feel of the film.

What we see next is a feeding frenzy of terror amongst the camp as the camp leaders stories become a reality and their darkest fears see’s them in a fight for a survival for life. The story may seem familiar; it feels like it has taken its inspiration from those 80’s family adventure films, Stand by me instantly jumped into my head.  However with the aid of lighting effects and the location setting Cub has that very much needed eerie feeling which so many horrors’ lacks at the moment. In fact, Cub is supposed to be a horror, but I’m re-classifying this film as a thriller.

It has an extremely slow build, with a hint of the upcoming terror that may be waiting, but it’s that slow it leaves you wondering if anything is actually going to happen. When it finally does jump into life it’s not as graphic as you would have thought it would be. Yes, we see one of the scout troupes leaders see a knife plunged into his eye but from the opposite of his face so it’s not totally in your face gore. We see no ripping of skin open and guts spilling out, but we know the gruesome is really happening.

Director, Jonas Govaerts has many awards under his belt for his short films and Cub is his first full feature, he certainly has delivered an engaging film, it’s certainly not your typical horror slasher and we can tell he prefers a bit more a psychological depth to his films when he delivers an unexpected twist at the end.

With an extremely convincing performance from the cast, Cub delivers a horror/thriller which for once ventures out of its box and takes a deeper plunge into the psyche of a troubled child. Engaging and entertaining I’m giving this horror a major thumbs up.

CUB is out in selected UK cinemas and on Demand 31st of July and DVD on the 3rd of August.