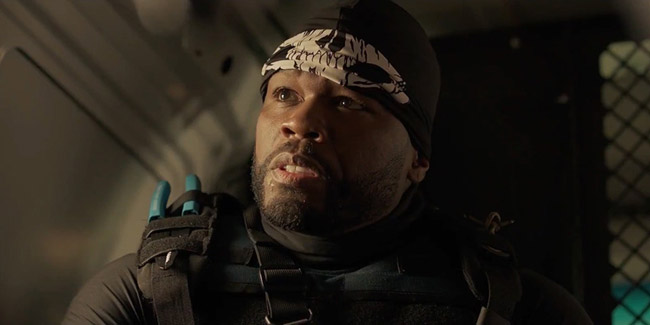 On Friday the 2nd of February, Gerard Butler and a whole host of muscle, including Curtis “50 Cent” Jackson, will be appearing in cinemas across the country in heist thriller, Den of Thieves. To celebrate the release Curtis Jackson sat down to talk about the film.

Den of Thieves is a gritty Los Angeles crime saga which follows the intersecting and often personally connected lives of an elite unit of the L.A. County Sheriff’s Dept. and the state’s most successful bank robbery crew as the outlaws plan a seemingly impossible heist on the Federal Reserve Bank of downtown Los Angeles.

Set in contemporary Los Angeles, a city with the highest rate of bank robberies in the world, the film takes the traditional “cops and robbers” formula and gives it a high- octane boost, blurring the lines between good and evil to create a taut action thriller that is equal parts grand heist thriller and psychological crime drama.

Gerard Butler (Olympus Has Fallen, How to Train Your Dragon, 300) portrays “Big” Nick O’Brien, the leader of the Regulators, an elite major crimes squad in the Los Angeles Sheriff’s Department hunting the mastermind behind a string of unsolved heists. Pablo Schreiber (13 Hours: The Secret Soldiers of Benghazi, Orange Is the New Black) also stars as Ray Merriman, the special forces-trained and recently paroled leader of the Outlaws, a gang of ex-military men whose subject matter expertise and tactical skills have helped them from being captured thus far. Curtis “50 Cent” Jackson (War Dogs, Spy) plays Merriman’s right-hand man, Enson Levoux. He’s a man you want on your side.
Also starring in DEN OF THIEVES are Evan Jones (A Million Ways to Die in the West, Gangster Squad, 8 Mile) and O’Shea Jackson Jr (Straight Outta Compton).

WHAT WAS IT ABOUT THIS PROJECT THAT MADE YOU EXCITED TO BE PART OF IT?

I think what stands out about it are the flaws in the characters and the details in the personal lives of the people involved. Most heist films show you the heist, but they don’t get into the backgrounds of the people that surround it. It’s usually enough to put some cool action sequences together like in THE TOWN or HEAT. In this film, it’s more about the vulnerability of
the characters. For instance, I have five kids in the film and I’m married and I looked at it like I am a man hiding myself in plain sight. They’ll never think that the guy who has five kids is then setting off explosives in the bank.

Merriman (played by Pablo Schreiber) and my character both had football careers and neither made it to the League. The leadership starts there. Then we make it into the military because we didn’t make it playing football. A lot of people find themselves in those circumstances because they’ve worked so hard to possibly make it to the League and when they don’t, they just sit on the couch or they take any regular job that they can find. We end up in the military.

My character Enson follows him. He has a quiet energy where he says less but does more. Even in the robbery scene, there were lines that were written initially for my character, but I asked that Merriman’s character say them instead. I just wanted to shoot the light out immediately and instead of talking about it, I just blow stuff up. He’s doing more damage, but he’s not saying anything about it. I think it’s a more likeable character when you’re not trying to force information on the audience and you can show them things that you want to tell them.

HAVE YOU ALWAYS LOVED THE HEIST MOVIE GENRE?

I do like the genre and I like the action in them. I think that the most entertaining thing that we can do is let off a squib. A shot is going to cost you about $5. How many different movies could we make with one shot? That could actually be a contest. Ask writers to write a film about one shot. There are many ways to make that entertaining because that shot is life-threatening. With the violence going on in our society, you’d think that we wouldn’t show guns, but we constantly show them. You know why? Because it creates a separation between us and the other animals. It was a rock and a spear, but it evolved to a .44 caliber hand gun.

I have to say that I really appreciate Gerard Butler coming out to talk about my movie. If you look at the poster, it speaks for itself. It’s my movie! Before we started filming, we were going to do training and we didn’t know who we were going to get. We got Leonidas! This guy comes in looking like his neck is a muscle. It looked like he’d been working out six hours a day. You don’t know what level he’s coming with. Gerard’s character “Big” Nick was supposed to be bigger. Christian Gudegast had been calling him “Big” Nick for six years. Gerard didn’t want to get big for this film, but he had to put weight on and train to get as big as he could for it. He put on 23lbs. Pablo Schreiber was training hard too. He was eating everything.

YOU DIDN’T FEEL THE NEED TO KEEP UP WITH HIM?

I’m already bigger than him. I can train down if I’m not eating and training and I can get slim on you. I have a hyperthyroid where I can put the weight on with no problem, so I trained to keep it a little lower so I didn’t make these guys look like little guys. I don’t want to offend people for no reason. I would come in and say, ‘This is not a muscle contest’. If my name was Vin Diesel and then The Rock signed on, I’d be going ‘What the hell, bro! Who signed this guy?’ I’ve got to go and work out now until muscles are coming out of my neck. You think that you’re in shape and you’re fit and then you get there and it turns into a competition as to who can discipline themselves and who actually works the hardest. Dwayne Johnson is in such great shape. It’s just nuts. I ran into him working out at Gold’s Gym in Venice and he was training next to me. I told him his arm looked nice. He looked at me like I was crazy.

WHAT WAS IT LIKE WORKING WITH DIRECTOR CHRISTIAN GUDEGAST?

COULD YOU RELATE TO YOUR CHARACTER?

I could understand him. I think people can see themselves in characters when there’s something relatable about them. They can forgive him for the things he’s doing. If there’s a female that you love enough to want to protect in your life, then you can identify with my character who has a teenage daughter who is at a place in her life where I’m not cool anymore. She’s 16 and her social circle is developing and what I say to her doesn’t matter.

DO YOU USE MUSIC TO HELP FIND YOUR CHARACTER?

If I associate something about the character with a song, I’ll play that song every time so I’m not having dialogue with people for no reason or forgetting what I’m doing. It helps me stay in the scene. I’ll play the song and not say anything until we’re ready to go back to the scene. I didn’t do this for the character of Enson, but I used it for Kanan on the Power series. I used the song ‘Risin’ to the Top’ by Keni Burke. In drug dealer culture, there’s this ambitious energy and this entrepreneurial spirit and the song says keep rising to the top and don’t let anybody stop you. With those intentions, it’s somehow lost in translation and it becomes negative because they’re trying to do it with no law, like don’t let no one stop you. It gets into a negative area if you look at the song that way, instead of what the words actually mean.

THE NEW YORK TIMES DESCRIBED YOU AS A BRAND, RATHER THAN JUST AN ARTIST. HOW DO YOU FEEL ABOUT THAT?

It was flattering when they said that. With the things that I’ve developed with what they consider my brand it has always been about my art as an interest. I’ve always been doing things that are consistent with lifestyle. I’ll accept the brand statement. I say that because our culture doesn’t allow people to survive.

Hip-hop culture is youth driven. They have a low attention span. You see people now and they come in and out. They have one song and then they’re gone. It’s so quick and you start losing track of who’s hot because there are so many people involved. The guys that are able to sustain their interest have to diversify and stay interesting from other perspectives and for other reasons. Good artists evolve as they get older, but the audience does also. It’s just that we don’t do the same things that we did when we were that age.

When you start to put energy into different platforms, they’ll go to the movies and see you or they’ll support you by watching your television show because it’s a different part of being creative. They’re not at the nightclub anymore. They found somebody in life and they have kids. They have a life and they grew up. It’s a change in lifestyle. Music marks time. We have a lot of great music, but there is music that stands out as the best music of a time period. People listen and agree across the board worldwide. That’s enough. The only thing we really make in America are people. Everything else comes on the slow boat from China.

WHAT HAVE YOU LEARNED ABOUT YOUTH CULTURE?

When I came up, they were scared. That’s why they didn’t give me the trophies. I got the cheque, but they didn’t give me the trophies. In front of people, they were worried that kids would want to be me if they gave me the trophies. When they see the story you’re telling about the journey that you’re on, they say that it’s amazing and that you can actually work your way out of any story. It allows me to become something special. I’m a symbol of hope because I say that you can make it no matter what your circumstances are. Not to say that your circumstances weren’t worse than mine, to begin with, but there’s confirmation in that alone.

When you look at the youth culture now, they’ve decided that they all want to be rock stars. Do you know what that means? They get high on different kinds of drugs now. The drugs that they’re using don’t have negative connotations around them. If I say ‘crack’, you see a person who stole a TV and sold it. It’s negative and you see a guy that looks messed up. When I say ‘Percocet’ or ‘Vicodin’, there’s no negative image that pops into your head. It’s a painkiller. You’re going to see a lot more kids hurting themselves with the pills. How much is too much?

DEN OF THIEVES IS RELEASED IN UK CINEMAS ON FRIDAY 2ND FEBRUARY, 2018