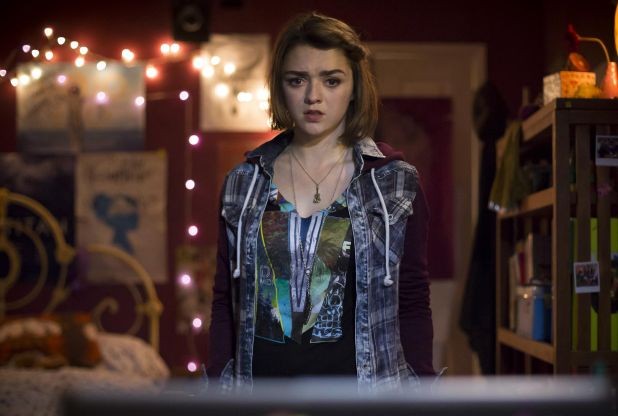 Last night I sat down to watch channel 4’s one off drama ‘Cyberbully,’ and I can confirm that I was gripped throughout. Starring ‘Game of Thrones’ actress Maisie Williams, I’d have to give her a pat on the back for her portrayal of the small percentage of social media users out there. With a computer screen amassed with media outlets (Twitter, Facebook, Instagram, Skype and Instant Messenger,) a smart phone by her side and a world of possibilities that await the tender push of a keyboard button, we follow a hackers self righteous attack on Casy to make her see the errors of her cyber bullying ways.

The Internet has long been the screen that some feel they can hide behind and this harrowing almost docu- drama hopefully gave some food for thought. I’d say that almost 99.9% of us have come to post something that somebody else would not agree with and that my dear is fine because we live in a world where there is freedom of speech and such a thing as healthy debate. We type a status, a tweet or post a picture or video to generate a reaction; a like, a comment, an emoji, a share, a retweet, a favourite, a follow… It’s all a bit tiresome really!

Casy is informed that her ex boyfriend has posted some rather personal details about her and some medication she takes. On one, Casy and BFF Megan plot to hack with the help of a fellow pupil into the Twitter of the ex, but fearing a royal kicking their hacking accomplice declines to help. A milo second later and the hacker has had a change of heart (or so Casy is lead to believe,) so Casy goes about her vendetta and posts something that would make any teenage lad weep. At first Casy seems to bask in the glory when she feels her vengeful comments towards the ex and videos insulting and mocking others is being applauded but she grows suspicious when things don’t match up.

The Internet is the perfect place to play out your malicious fantasies, to insult people that have never met you and basically be a a tool. I don’t get the twisted appeal really, making someone feel low to get a cheap frill? It’s not as if the person making such freaky comments has the pleasure in seeing their victims pain but that’s where they must be gagging and itching for a furious response, hoping they’ve insulted and angered that person enough to fuel the fire. I can’t lie, I’ve seen some pretty vile tweets and it’s got to me even when it’s nothing to do with me.

In a change of events Casy is forced to see how her actions lead to bigger consequences. Putting people down and brushing it off as funny- in a culture of laugh at or be laughed at.

Just like the film ‘Saw’ Casy is subjected to a cat and mouse game where she must convince the anonymous troll that she honestly repents all of the hurtful, brutal, shameful and down right nasty actions she has acted out via social media, as well as under a pseudonym to conceal her identity. We see a girl in a video clip being ridiculed because it’s suspected she might be gay but more importantly it is the sharing of Jennifer Li singing that kicks off this online attack.

She is blackmailed and coerced into certain situations which appear lose/ lose. Although far fetched, it teaches us a huge lesson, if the shoe was on the other foot, how would we like it?

We’ve seen so much recently in the media regarding hacking and although not as imperative and crucial to stop as let’s say a Government file being broken into, naked pictures of celebrities including Jennifer Lawrence have been surfacing for quite a while. I can’t quite fathom how somebody could commit such a cowardly and sinister act towards another person. Trolling is defined as:

‘A person who sows discord on the Internet by starting arguments or upsetting people, by posting inflammatory, or off topic messages in an online community with the deliberate intent of provoking readers into an emotional response.’

We’ve all quite possibly come into contact with a troll. I once received a Facebook message from somebody that had friend requested me on facebook after a brief television appearance. The troll was sugar, spice and all things nice until she disagreed with one of my statuses, prompting a barrage of messages including racist slurs and pathetic comments about my appearance and voice. I wasn’t shocked at the things she was saying to me because they were very playground insults but what shocked me the most was how this person’s character had changed so drastically from lovely to hideous.

We hear it often that female celebrities are subjected to antagonistic comments and claims- from their weight, to lies about their partners, to just damn right ugly and abusive taunts and threats. Unfortunately it’s not just the celebs that get a hard time, so it’s imperative we do what we can to avoid an online bashing.

1) Where you can, turn your profile to private. This will ensure that nobody without the skill of hacking can view them and comment.

2) Be aware of the content that you are posting- think to yourself would this offend somebody, embarrass or shock?

3) Report it- Don’t even question if something somebody has written regarding you seems minor.

4) Block it out- a useful feature in the life of a social media obsessive. If somebody is bang out of order and you don’t want to hear it, kick them where it hurts.. Trollers can’t stand to be ignored.

‘Cyberbully’ was a bitter sweet lesson, you feel sorry for Casy for being subjected to this online torture but then you learn that she’s not much better than the person trying to teach her a lesson. As Gandhi once said “An eye, for an eye makes the whole world blind.”