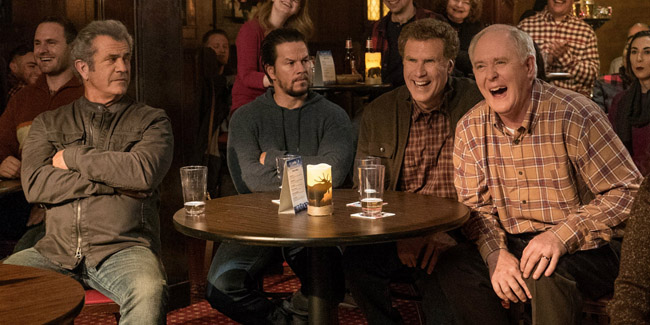 Christmas is looming, for Hollywood there’s no better time to churn out the inane sequel with a virtually unoriginal transparent plot repeating itself, lacking in intelligent humour just to get a few bums on seats and at the same time wasting any talent their big named cast may have. What we have here is yet another lazy attempt at entertainment that in no way warrants a sequel.

In the original Daddy’s Home, Modern day parenting saw Brad (Will Ferrell) and Dusty (Mark Wahlberg) act like children vying for control as Stepfather and Father with disastrous consequences, mostly for the accident-prone Brad. Nothing much has changed in the sequel accept the two men are now best buddy’s, but it’s the children who are sick of having to choose where to spend the holidays. Agreeing to have one big family Christmas together everything seems to be perfect, that is until both men’s Father’s show up in the form of Mel Gibson as Kurt as Wahlberg’s Dad and John Lithgow as Farrell’s.

Lithgow’s Jonah is Brad’s carbon copy, ever cheerful and annoyingly chatty but harbouring a the mother of all secrets from Brad, Gibson’s Kurt is the stereotypical macho egomaniac and womaniser who likes to stir the pot just to undo the good relationship the two fathers have built – mostly, to cover up his own failings in Fatherhood with Dusty.

The narrative bumbles along like a car crash waiting to happen, the same old gags, with the same old sequences of awkward idiocy from Farrell who takes a barrage of ribbing from Kurt and harmful mishaps in his stride. The script also verges on the questionable, considering Gibson’s sexist past, there is a scene in which he tries to get his grandson to pick up a gun and go hunting but when the granddaughter wants to do it instead there’s a whole speech about girls sticking to the kitchen. Also, putting a fully loaded gun into the hands of a child under the age of 10 is inappropriate and quite frankly reckless.

Wrestler-turned-actor, John Cena even gets a chance to show his acting chops yet again in meaningless role as another testosterone-fuelled stepfather – It’s a role anyone could have walked straight into – There are a few laughs through in that are titter-worthy mostly in the last quarter where Dusty’s love of the modern day Christmas carol, Do They Know it’s Christmas infuses the saccharine forgiveness scene in a plot similar to a child’s paint by numbers, the whole picture is contrived to attract audiences just by the names starring.

Adults, be warned, if forced to see this, a few glass of Christmas spirit should be consumed before embarking on this Christmas pudding.