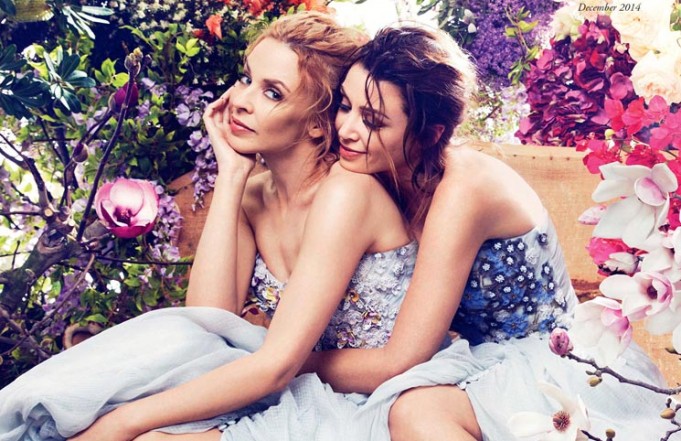 Dannii and Kylie Minogue have been photographed exclusively together for Australian Harpers. The photo shoot which sees the Aussie superstar sisters photographed together, if their first shoot with one another since gods knows when. Beautifully styled, colourful and exuberant, Dannii and Kylie look like the human version of Tinkerbell in the opening spread. They’ve dominated our TV screens and music charts for decades, weathered storms both personal and professional, and bonded over Ugg boots … Kylie and Dannii Minogue tell eliza o’Hare they’ll always have each other’s backs.

The one thing I remember is our bedrooms in the house in Camberwell; I can still see the single beds. We had wardrobes that opened on both sides, and there was a big kerfuffle because we were both teenagers and we’d always be stealing [each other’s] clothes Dannii reminisces of their worst childhood fight and says

Oh, but I think the worst fight ever was the time Kylie snuck out the window. I dobbed on her.You weren’t very happy with me for a while after that. The thing is, everybody thinks Kylie is ‘the good one’ and I’m ‘the naughty one’. But I only dobbed on her because I was so worried. Yes! I want to date someone inspiring,” says Dannii. “Someone who transcends just being a person you can do things with. I’d like someone who would make me feel like I’m their soul mate.” “And I know they’re coming,” says Kylie. “But I just don’t when.That’s the hard part. The issue is on sale in Australia November 10th.