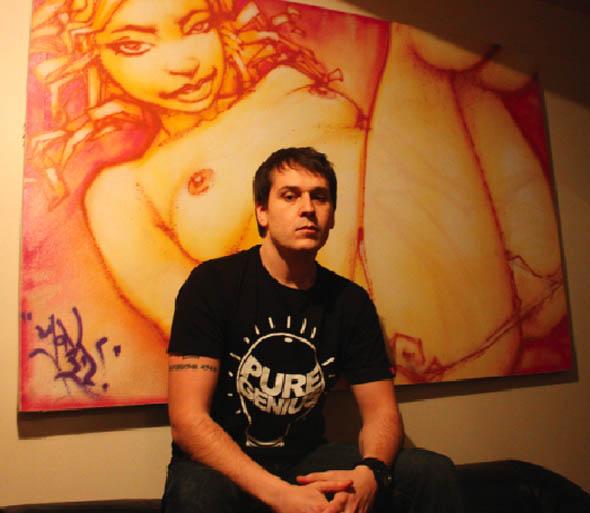 Danny Donnelly is the East End lad come good, through hard work and an intense
understanding of what people want.

After leaving school with no qualifications at 16, he immersed himself into his love of music to become one of the most successful producers of the urban world. His biggest achievements come in the shape of his hugely influential drum and bass label Suburban Bass and the even more prominent brand of Pure Garage, Pure RnB and Pure Euphoria. Some 20 to 30 coloured discs in his house are testament to Danny’s huge success.

But he’s more than a media mogul, he’s a businessman, the kind you’d see on Dragon’s Den, pouring out savvy business acumen as he toys with the idea of taking a stake. After a two-year hiatus or, as he calls it, “retirement”, Danny Donnelly is back to single-handedly take the UK film industry to head-spinning heights. Flavour is honoured to get an invite to his house to find out more.

You have an inspirational story…
My upbringing is an East London boy who came from Stratford near the Bow flyover. I remember being in Abbey Lane, and my family actually had a store in Abbey Lane. My parents worked hard to give us a good life. At 16, however, I left school with no qualifications, and I started my company Boogie Times Records when I was 17. I had my only job when I was 16 in a record shop, the only job I have ever had, but that was my education in retail and it helped to fuel my ambition to have my own record shop.

Was school not an enjoyable period for you?
Well, in truth, my problem with school was I never liked the way the teachers spoke to me and I rebelled. I was told when I left school with no qualifications that “Donnelly, you will never amount to anything”. My drive at that time was just to prove all those doubters wrong.

Indeed you did; your music CV is pretty extensive. How did humble beginnings as a record-shop owner turn into such a success?
I started the record label only because I wanted to sell exclusives, but it became such a big thing and just snowballed. I was selling records and stuff to other stores. I got a distribution deal and within the first year we had like eight top 75s, three top 40s and a top 10. It was a quick learning curve and I was running it single-handedly from a room above my record shop all under the age of 20.

So how did you go from music maestro to wanting to be in films?
I had no real ambition to be a writer or a producer, it was more the change in peoples’ music-buying habits, where less and less music was being bought. The way artists can make money is by merchandising or synchronising, which is getting your music played on TV adverts or films. I am kind of proactive, so instead of waiting for someone to say here is a movie soundtrack to score, I thought I will start to produce films myself. Was that an easy transition?
I did Pure Garage, Pure RnB, Pure Euphoria, all TV-advertised products, so I have worked a lot with production companies so understand the language of a production crew. I did TV adverts and music videos for years, so it is not that alien to me. I am absolutely relishing this challenge of the film industry.

UK film has historically taken quite a bashing – what are your feelings about it now?
I think this is a very exciting time for the UK independent film industry. The UK film industry is kind of where the music industry was when I started out. Production costs are coming down, but not to the point where everyone can do it. But it is a little bit easier and what we are getting are some very exciting British films being made, and I want to be part of that.

You worked on Victim and now you are mid-shoot on Lethal. What is the common misconception about a shoot?
Some of these independent shoots can be tough. We had a scene where we had to shoot in a chicken shop. There was snow on the ground, it was freezing, the chicken shop was smelly – it was tough. As an actor, you need to be there because you want to be there. As a crew member, working in those conditions it is not glamorous. We are on set from 7am at the latest.

Talking about Lethal, what has the journey been like?
Lethal as a film project I wrote towards the end of last year and put it into production straightaway. We are going to wrap on it in February. It went from an idea rattling around in my head to a film with a great cast that is going to be in the cinemas by Halloween this year. That is success and making it work. It is a UK film that steers clear of the urban gang genre that has been fairly prevalent in the UK scene. It is based in London in flats and so people can understand it. It is not an overtly gang film, it is just a group of friends who dare one of their mates to stay a night alone on a derelict council state. Lethal is meant to be different, it is an urban horror. It widens the market for the UK independent film because it has sales potential outside the UK. British urban hood films are very UK focused and do not translate well in other countries. Hopefully Lethal will achieve that translation.

What other films are you working on when you finish filming?
I will pick up pre-production on a new film called Payback Season – I cannot say too much on it, but we are going to start casting that. It will be a bigger cast than Lethal so there will be more opportunities for actors and filmmakers. There is another script called Fatal Knowledge, which will be a low-budget film; so basically we have three films coming out this year.

What opportunities can you offer?
The good news is there are some strong independent filmmakers. I am in a position that I can fund a film completely in-house. In fact, we can make a minimum of four films per quarter easily. We have some good opportunities. In the first film, we had open casting and discovered actors, so we are able to give opportunities to newcomers. Right now, follow us on Twitter @purefilm to find out about all the stuff we are doing.

What advice would you give to those seeking a career in film?
You need to approach in the right way, with a humble attitude, and come and help out on a film. On Lethal, which we were shooting last year, we had about half a dozen production assistants who joined as volunteers. They are there and getting their foot in the door.

Top tips:
– Generally, if you want to break through in film, then you need to make your contacts
– Have the right attitude
– It would be good idea to study – I have fallen into it but if you want to produce, act or direct, do the courses, then after that it is about hands-on experience
– Do a little more expecting less, eventually it will turn around