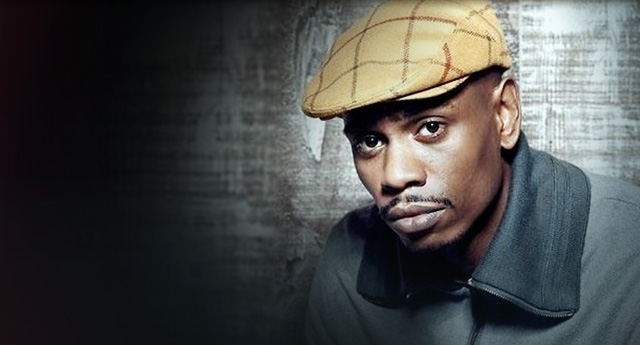 American Comedy heavyweight Dave Chappelle will be performing at Eventim Apollo Hammersmith in July. Prior to this, Chappelle has only ever performed ten minutes of stand-up in London, seven years ago.

We’re expecting this one to go very quickly so get your tickets right away by clicking here: http://www.eventim.co.uk

In 2013, Chappelle made a surprise return to stand-up and has since been touring America. His unpredictable and edgy style has won him enormous plaudits all over the world, including huge respect from Jay Z and Chris Rock.

This is massive news for Chapelle’s UK fans, who will be extremely excited to see him back in London. Stand-up comedian, screenwriter, actor, TV and film producer Dave Chappelle is widely celebrated for his Comedy Central sketch series Chappelle’s Show, which was co-written with Neal Brennan. Having also featured in films such as You’ve Got Mail, Robin Hood: Men in Tights, The Nutty Professor, Con Air and Half Baked, Chapelle is a well-known face on screens internationally.

Esquire hailed Chappelle as “The comic genius of America” and he was named as one of Comedy Central’s “100 Greatest Stand-Ups of All Time”. With such high accolades, this exclusive UK performance is sure to bring the house down and is not one to be missed.

We’re expecting this one to go very quickly so get your tickets right away by clicking here: http://www.eventim.co.uk