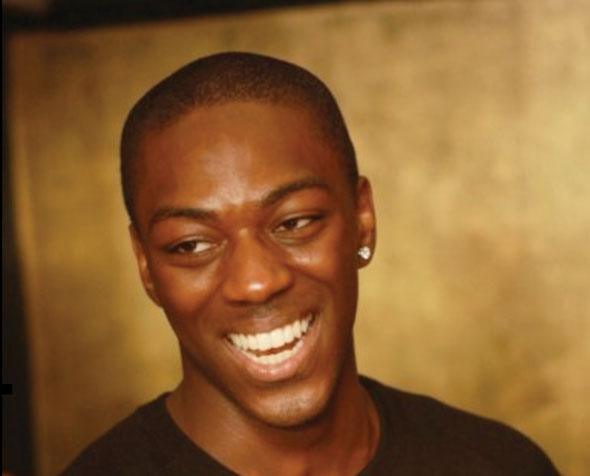 David Ajala is the progeny of successful black British actors. At the age of 23 he has starred in Hollywood blockbusters and worked alongside stalwarts like Patrick Stewart. But he’s more than just a serious thespian. He box’s, plays Pro Evo and likes to bust a little freestyle rap every now and then…

As we meet up for the interview he greets me with an award winning smile, complements my floral dress and tells me he may start wearing floral shirts. This man is charm personified…. What would you say is the best thing about acting?
Being in control of the character you play, you bring it to life with your personal experiences.

What’s been your most memorable experience so far?
This interview! [Laughs.] There’s been a few. Joining Anna Scher [acting school]-there was a 4 year waiting list and I rate my mum, she’s a hustler, she pushed and got me in quickly. Also getting a role in The Dark Knight.

You recently had a Royal Television Society nomination what was that for?
[Smiles.]Yes, in December. I was nominated for my comedic skills on Trexx and Flipside. I was chuffed to hear about it. I was up against Rich Fulcher [Mighty Boosh] he’s a ledge so I knew I had strong competition.

Do you have a little comedy blood in you?
Me? A little. Well, you cut the cheque I’ll do anything to be fair [Grins.]

Can you make me laugh then, a proper belly laugh not a little giggle?
Hmmm, let me think- arggh, its hard to do it on the spot!

So you played a rapper [Flipside] can you spit?
[Laughs] Well you give me a beat! [He proceeds to freestyle] Wow that was terrible!

Ok, lets get a little serious. Last year you had your first Royal Shakespeare Company role (Cobweb in A Midsummer Night’s Dream) – are you a fan of the Bard?
I love Shakespeare, and my love for that genre grew even more when I was in Hamlet [playing Reynaldo] because I got to share the stage with really talented actors.

Yes David tenant and Patrick Stewart, what was that like?
David Tennant (DT) [Grins.] I remember once off stage we did a little freestyle dancing, DT joined in- he broke the stereotype that white men can’t dance! He’s just a great guy who happens to be a brilliant actor. Patrick Stewart is a legend and he knows it! A friend of mine bumped into him and said ‘Patrick, love your work’ Patrick replied ‘Hmmm, of course you do!’

And they did attract a lot of female attention! Especially DT!

Any stage door shenanigans going on?
Yeah there were some excited ladies but when any of that came my way I politely declined!

What about working with Heath [Ledger] in Batman?
At rehearsals Heath actually walked up and was like ‘Hey dude, good to meet you I’m Heath’ he was a chilled guy and I was naïve to how big he was so I think that helped with my ease in the situation. He was on a whole other different level when it came to acting.

His death was linked to drugs. How do you keep on the straight and narrow?
Hold onto things that keep you grounded. For me its family and faith. Faith means everything to me- I’m not the best Christian, I just try to live right.

As a young black actor do you feel like you need to behave a certain way? To be a role model?
I’m just trying to work and be the best that I can be. I’m not flying a flag for anyone but I’m not ignorant to the fact that some people may look up to me so there’s a certain level of responsibility and sensitivity that one has to have. Not that you have to be an angel or anything. You are who you are.

Do you think its getting easier for black actors to get roles now?
Definitely in comparison to twenty years ago, although you can still say that this country operates on a class system and that can sometimes be limiting in regards to the roles you are offered. But when I worked on Doctor Who for example it wasn’t about me being a black actor. I was just an actor.

When’s your episode out?!
In March. I play a bad guy!

How did you prepare for that…you were walking into a slice of Sci-Fi history!
I have to admit I hadn’t seen a full episode but I saw a few before shooting mine. It’s a really watch-able show. I understand why there are so many die hard fans!

How’s your down time spent when you’re not working?
A bit of Pro Evo! And I like to box.

What about your face?!
Yeah my agents have told me to hold the boxing back a bit. I need to look after the pretty!

Anything new coming up?
At the moment I’m in a play called Nation based on a Terry Pratchett novel and I’ve just wrapped on a film called Following Footsteps with some great UK actors-Chucky Venice, Matt Di Angelo.

That’ a good looking cast!
Exactly that’s why I can’t get to caught up in the boxing! I’ll miss out on the pretty roles [Laughs].

David is currently starring in Nation at the National Theatre, visit www.nationaltheatre.org.uk/nation for more info. His Dr Who episode airs March 20th on BBC One. Following Footsteps is planned for release later this year.