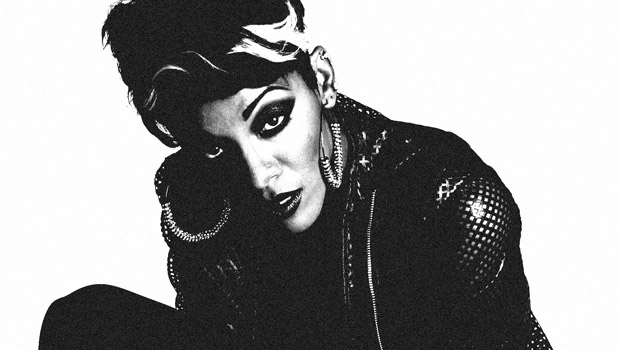 Danity Kanes second break up announcement only came out a month or so ago and the highly anticipated “DK3” album was only released on Monday but Dawn Richard is not holding back! Dawns second solo album and the second instalment to her music trilogy became available for pre-order online last week, but has since been removed. However since then and only two days after the “DK3” album dropped, Dawn changed her Instagram 2 a black theme and tweeted the cover for her second solo album. With that said, Blackheart is finally on its way!

Dawn Richard first burst onto the music scene as one fifth of the massively popular, all american girl group, Danity Kane in 2006. Danity Kane secured themselves two number one albums and made history as the first all girl group ever to have both albums debut in the billboard charts at the top spot. Since then the public watched the singer continue her music career in the successful three piece, Diddy Dirty Money and also as an independent solo artist. With two popular mixtapes, a successful EP and a critically acclaimed independent solo album under her belt, Dawn Richard is not someone to sleep on! Recently the 30 year old put her solo career on hold and rejoined forces with the all girl group, Danity Kane. With a sold out american tour, twitter hype and media focus the girls reunion was tipped for big things. Unfortunately the first hiccup for the group came when member Aundrea Fimbres announced her departure to start a family. The girls however continued to move forward with fans and the media nick naming them DK3. The second and final hiccup came in the form of a physical fight between Dawn and another group member, Aubrey O’Day. Sadly this was too much to overcome and Danity Kane released statements online announcing their second split, causing uproar and upset with fans. Thankfully the girls decided not to waste the unheard music and released the highly anticipated come back album “DK3” earlier this week. The album went straight in at the number 1 spot in the RnB iTunes chart making this Danity Kanes third number 1 album. Not only did it score high in the RnB chart but it also peaked at number 3 on the overall iTunes chart. Despite the rumours online of the girls apparently putting their issues aside and reuniting again for the third time, Dawns second solo album “Blackheart” became available for pre-order online but has now since been removed. Why? We have no idea! However since its removal Dawn has finally now confirmed that it is on its way! Luckily we got a sneak preview here at Flavourmag before it vanished into thin air.

“Blackheart” follows on from the successful debut album “Goldenheart” and forms part of the music trilogy put together by Richard. The third and final instalment will be “Redemption Heart”. “Blackheart” showcases the singers unique vocal tone and range over edgy, electric and dark, but uber cool, RnB beats. Being an artist who is known for creating sounds and visions which are way before their time, this album is one you can not miss out on! The dope unique style that the female singer oozes is plastered all over the tracklist perfectly. Danity Kane fans have not been forgotten by the song-writer and are in for a treat with a collaboration from Aundrea Fimbres. Fimbres appears on the track “Phoenix”.”Blackheart” is made up of 14 tracks and is set for release January 15th 2015.

The RnB singer also released the lead single “Blow” from “Blackheart” in the form of an official music video! Check it below!