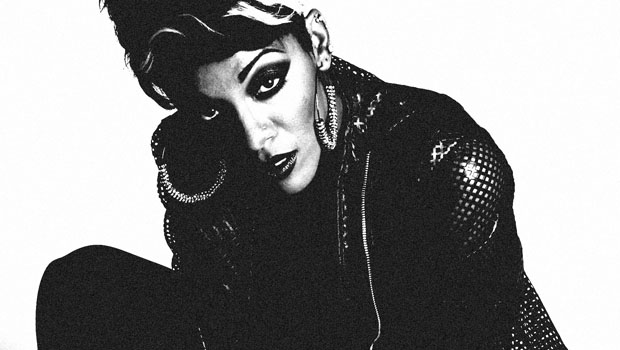 Singer Dawn Richard’s impressed the world as a member of high profile music groups Diddy-Dirty Money and MTV’s “Making The Band” girl group Danity Kane. She amazed us further as a solo artist with the release of her acclaimed EPs Armor On and Whiteout. Now the beautiful 29-year-old singer/songwriter is really shining with the release of her long-awaited debut album Goldenheart which topped the iTunes R&B chart during its first week of release earlier this year. Flavourmag had the chance to interview and arrange and exclusive photo shoot with the New Orleans-born singing powerhouse on her recent trip to the UK.

Welcome to the UK. How are you finding your trip?
Great thanks although I’ve decided to get sick since I’ve been over here.

Well I hope that you feel better soon. When and where did your love of music begin?
As a kid I found myself listening to my father play the piano. It was love at first note.

What do you love most about what you do?
Connecting with people and making them feel something or helping them through situations with my music. That’s an amazing feeling.

What motivates you?
The people still rooting for me and the doubters who want to shake me. Both are needed as fuel to your fire.

What’s the biggest challenge you’ve faced so far in your career?
Challenges isn’t in my vocabulary. There hasn’t been anything that we haven’t looked at as something we couldn’t conquer. No challenges only situations I’ve yet to conquer.

Many people don’t even realise that you’re an independent artist. Why do you think that is?
I think because the quality of the music and the visuals are so spectacular I think people don’t realise there’s no money behind that. I don’t want a free ride. I don’t want people to give me a pity party because I don’t have a machine behind me and I don’t want people to look at my work and think its not up to standard. But we are independent which is why you don’t see my on TV or hear me on the radio we don’t have anyone really selling the product. We are selling the product out of the car, using new models and doing everything on social media.

Why did you call your album Goldenheart?
I feel through everything I’ve been through I’ve maintained a constant passion. A steady heart through all this. A Goldenheart if you will. When you first enter into a relationship or this business you’re pure and almost naive: golden. Over the course of time you find that it’s a battle to maintain that and I feel that’s not only my story but the “Hearts” story as well. On Goldenheart you say you feel like [the Greek king] Leonidas in your lyrics. Where did that come from?
I’ve been hurt so bad that I feel like I want to go back to the days of fairy tales. You know when. You were a kid and you believe there were white knights in shining armor. That’s what that is, the premise for the whole record. I wish we could go back to that naïveté. I wish I could have never seen pain. Once you feel what hurt feels like, you lose it.

What’s your favourite track off the album and why?
Northern Lights is such a great record. It has a New Orleans feel to it that just makes you want to dance and sweat all your perm out.

What do you want people to take away from the album?
That it made them feel and that it’s changed them some way; for the better.

What made you take the independent route?
When Dirty Money broke up, I was like, “I’m going to do this myself and I want to tell it the right way.”

If you was to create a super group of five members, who would be your first choices? Dead or alive.
Prince, Michael Jackson, Phil Collins, Jimi Hendrix and me on the bell (laughs).

You have a very unique style, how would you describe your dress sense?
I wouldn’t. I couldn’t describe my style. What I like I wear. If you get it, great! If you don’t, that’s fine too. (laughs)

Are you still in touch with your band mates from Danity Kane?
Yes, very much so. We talked when the album dropped and we are all very proud of each other’s accomplishments.

How do you cope with negative press or people dissing your fashion style on the internet/blogs?
They hate me but I don’t care anymore. I’m me this is what you get. I’m an acquired taste. I don’t look like your idea of what you think is cool. but I’m a beautiful person and I’m tired of people trying to get me. I love wear I’m at, at the moment and represent other girls that are awkward too. That’s what I love about the UK, you embrace people being different more.

What’s your idea for the perfect date?
Booze, candy, and a hot guy. Not in that order exactly. (Laughs)

What’s the most romantic thing that someone has ever done for you?
Still waiting on that.

What qualities do you look for in a partner?
Honesty, humour, and intelligence.

If you hadn’t been a singer what do you think you’d want to do with your life?
Work at McDonald’s so I could make the fries less greasy.

What’s the plan for the rest of the year?
World domination. The hearts are ready for it. We started the year off so great with some many good reviews. The critics have been way to nice. We’ll be back in the UK in the Summer and my next single will be coming out soon ‘Riot’. I think its going to do really well here. Its a really great power, dance record and has so much meaning behind it and I just think people are going to start a riot for love. I’ve got so much love to give and I just want people to follow me with a passion. Most of my fan base I’ve become my best friends. They’re not my fan base they’re so much closer to me then that they’re family. They love me as much as I love them.