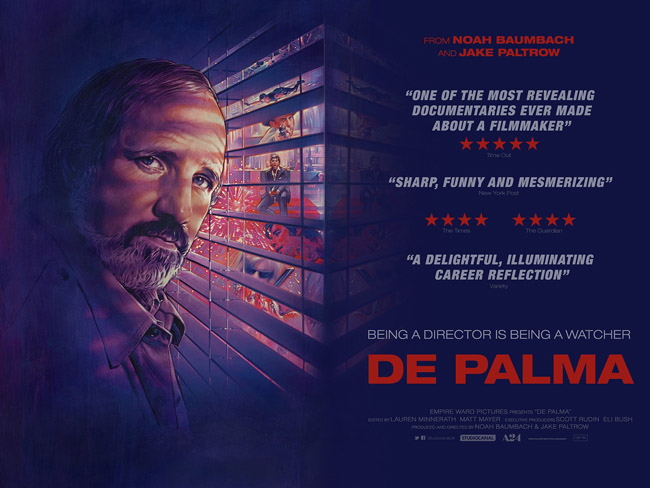 Some filmmakers simply do not need an introduction; Brain De Palma is one of those exceptionally talented people.

It’s a fitting tribute that in De Palma, Noah Baumbach, and Jake Paltrow have kept this documentary simply by just sticking the man himself in a chair and letting him run through his career bit by bit with no holds barred.

De Palma – whose career spans over the best part of fifty years as a director, writer and producer – is responsible for some of the biggest and most iconic movies of our time, from Carrie, to The Untouchables, Scarface, Carlito’s Way and most recently Tom Cruise’s Mission Impossible to name just a few. The format of the documentary may seem like a conversation with… however, it is so much more as this figure of cinematic controversy explores his career with brutal honesty, taking apart his films and actors alike along the way; no one is spared from his enlightening, witty and enthralling stories.

Fused together with fascinating clips from not only his own films but those from whom he was heavily influenced by – including his love for Hitchcock – De Palma envelopes us in stories from behind the scenes including his run-ins with the studios over budgets, outing actors who were jealous of their female co-stars and tried to sabotage their performance, kicking Oliver Stone off the set of Scarface as he was influencing the actors in a way that was detrimental to his vision, to why Sean Penn had a total disdain for Michael J Fox on the set of Casualties of War.

De Palma –who was once a science nerd before his film career started – doesn’t shy away from his own personal life either as he freely admits how he followed his own father when he was having an affair and how that influenced his character Keith Gordon in Dressed to Kill. His career may have crossed many years which can make this relentlessly exhausting but it’s made in such a way that is whole-heartedly gripping and like his filmmaking simply shockingly delightful. Quite simply, De Palma is what every movie fan’s wet dreams are made of.

De Palma is out in cinemas September 23