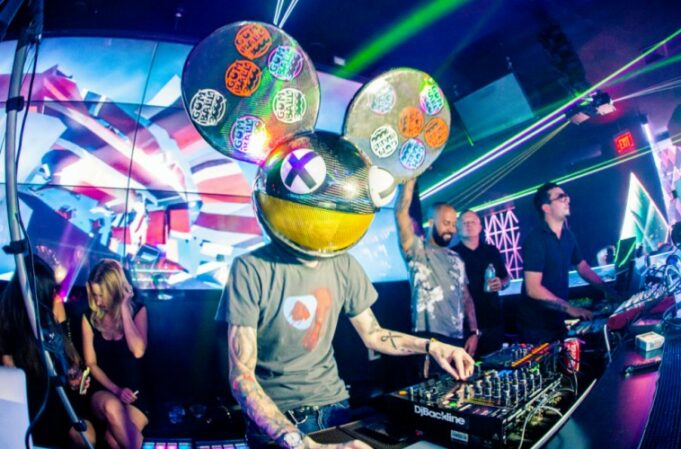 Dropping beats isn’t the only thing that will keep Deadmau5 at the forefront of the electronic music scene.

An exciting new collaboration has brought the opportunity for Joel Zimmerman – the man behind the iconic mouse head mask – to further explore his passion for video gaming.

Aside from Zimmerman and his alter-ego becoming hugely successful in the music industry himself, the renowned producer, DJ, and musician has collaborated with numerous other artists over the years, including Cypress Hill and Rob Swire. Credited with the soundtracks for several hit movies, while also making numerous TV show appearances himself as Deadmau5, a passion for videogaming has also led to a variety of collaborations in that arena too.

Deadmau5 has already featured musically or visually in a host of video games, including a custom soundtrack for Dota 2 and his helmet as a special reward item in Rocket League. Now it appears that Zimmerman has quite literally hit the jackpot, following the release of the first online casino game based entirely around his unique musical style and visual appearance, with the Deadmau5 online slot by Microgaming.

Responsible for developing the world’s first true online casino software in 1994, followed by the first mobile casino software just a decade later in 2004, Microgaming has risen to become the foremost providers of software and games in the online casino gaming industry. Based on the Isle of Man in the United Kingdom, Microgaming was a founding member of eCOGRA, the regulatory body setting standards for fairness and responsible casino gaming.

Microgaming casinos feature prominently in the list on bestcasinos.net and always have a strong presence, principally because they have gained one of the best reputations for the quality and quantity of games produced. Their prolific and innovative range of games are usually amongst the top selections and many leading online casinos, while their software development is often what makes numerous casino sites tick under the hood. All designed and created from some of the funkiest offices around.

Perhaps one of the most famous casino games produced by Microgaming is the Mega Moolah slot, one of a suite of progressive slot games that have hit the international headlines, thanks to numerous jackpot prize payouts that have created instant millionaires. The biggest single jackpot to date was won by a former British soldier in 2015, who landed a prize worth just over £13.2 million. That sum remains a world record payout for an online slot machine game.

A keen eye for collaborations has brought Microgaming further success and renown. They have already released various branded slots with blockbuster TV show and movie ties, including Game of Thrones, Jurassic World, Lara Croft, and the Terminator franchise. Village People also have their very own themed “Macho Moves” slot game, while the Playboy adult entertainment brand is the inspiration for a saucy range of slots, amidst a vast range that touches practically every entertainment genre and style of gaming.

The global launch of the Deadmau5 online slot was officially announced in a press release by Microgaming at the start of November 2020. The company expressed their delight at partnering with the Grammy-nominated Canadian electronic music icon, presenting the first of a possible series of games that will feature his unique branding and style. Initially, this new online slot will be exclusively released via online casinos already in partnership with Microgaming software platform, before rolling out to other sites around the world.

Along with incorporating the latest slot game design technology, the Deadmau5 online slot features an explosion of audio and visual treats from the Canadian EDM star himself. Not only is the trademark “mau5head” logo itself present with every spin of the reels, gameplay also features visual footage from the visually stunning Cube v3 tour, accompanied by the kind of rhythmic style that only Zimmerman could produce, filling our ears with fun throughout.

While elements that anyone familiar with Microgaming slots will know already, such as Rolling Reels and Cube Scatters, the Deadmau5 slot presents an entirely new and unique feature. As the bass beats drop, players will also get to experience a brand new “Drop The Wild” feature, randomly turning several of the reels to land on the wild “mau5head” icon, guaranteeing an instant prize win.

Always popular with online casino gamers, the free spins feature is present and by landing anywhere between three to five scatters, players can get an instant boost of 15, 20, even 25 free spins. This feature also has the potential to drop expanding multipliers, leading to payouts worth 10x the original stake. Insofar as the biggest individual wins from a single spin are concerned, these can range up to a nerve-tingling 2,100 times the original stage.

The Key to Future Collaborations

Despite having featured visually or musically in many other video games, the Deadmau5 Online Slot is the first game dedicated entirely to the work of Joel Zimmerman himself. To get his brand and work featured within a game of his very own, that’s an impressive testament to the artist himself, not to mention his impressive success and global appeal. Hopefully, this will pave the way for more online casino gaming opportunities, based entirely around the electronic dance music scene.