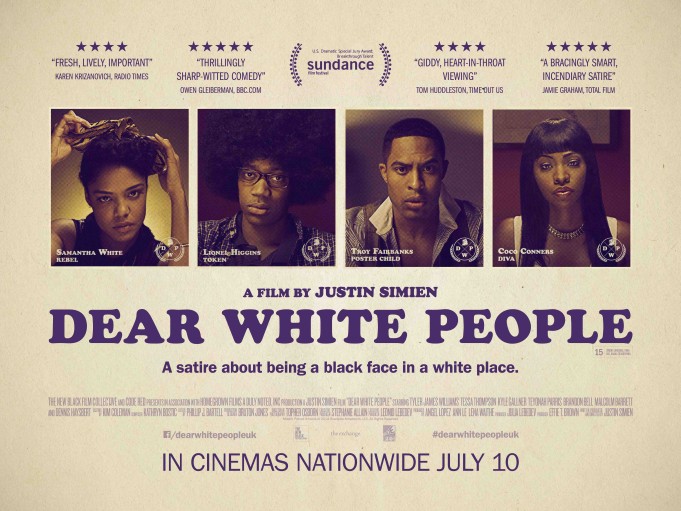 Within in the past year or so we have seen a number of films retracing the history of a racist America from films such as 12 Years A Slave, The Butler, Selma and a more modern day Fruitvale Station which have all been based on true stories.

Dear White People follows the lives of four black students at the predominately white Ivy League Winchester University. There is absolutely no build up to this storyline and it goes straight in from the beginning with in your face attitude when controversy ensues from the very beginning. When Troy (Brandon P Bell), who is very much under his father’s influence, with his white girlfriend, stands for election of house president again, his opposition, his ex-girlfriend, Sam (Tessa Thompson), a militant activist hell-bent on causing friction with her radio show in order to gain respect and the same treatment as the predominately white campus.

We also have Coco (Teyonah Parris), whilst being told she’s just from the “hood” by a TV Producer, vying to be the next social media star and thinks trying to fit in with the white crowd will score her points when she tells it how it really is for her vlog. Then we have Lionel, A Gay student with an enormous afro who has no interest in black culture whatsoever until, while writing a story for the college newspaper stumbles on racist behaviour he really doesn’t like becoming an unexpected hero.

Dear White People brings us up to present day, whilst being fictional, and based in a middle-class affluent University it still tries to tackle the ignorant mindset of both white and black people alike in a clever, stylised yet militant storyline. When I mention ignorance of both races I’m talking about the stereotypical way in which the white students look at black culture especially when they host a black face Halloween party and some of the black students think they have to forget their culture and become “white” in order to be accepted and gain a place of respect in society.

The underlying story here is it’s a tale of growing into and accepting who you really are and not conforming to what you think you should be just because it’s expected. Sam’s story is testament to that, at first her character was this unlikable militant set on causing trouble but as the film unfolds so does her true personality and her background making her a much softer and open-minded individual who finally accepts what and who she is.

Whilst laced with humour throughout, the first half hour was a tough watch because it was so full on from the very start. But as it went on it smoothed itself out, settled down and became a compelling and intriguing watch. The title may suggest it to be provoking and itching for a fight but in reality anyone who tackles this subject should be praised, it’s a modern honest look of finding who you really are.