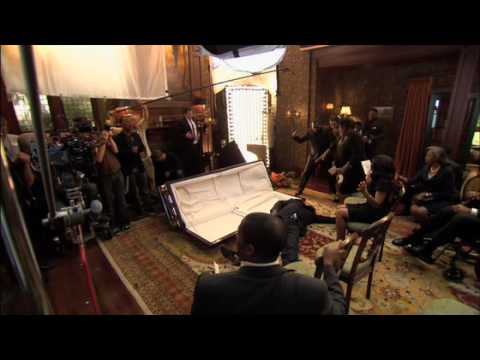 If the film title sounds a bit familiar then that’s because it’s a remake of the British Frank Oz movie of the same name. However the story surrounds a family gathering to mourn the loss of their father. In the opening scene at the funeral within the coffin is the wrong body, a Chinese man or ‘Jackie Chan’ (LOL…) from there things start to take a turn for the worse with the funeral descending into chaos with family secrets exposed, a few crazy guests running wild, blackmail, relationships and a certain little dwarf.

Meanwhile paraplegic uncle (Danny Glover) suffers an upset stomach on top of an already bad-tempered personality with Ryan (Martin Lawrence), adding pressure to his brother Aaron (Chris Rock) eulogy after refusing to pay for half the costs of the funeral.

Things then start to get a little exciting when a dwarf suddenly appears and claims he had been having an affair with the deceased. Aaron doesn’t take the news too well and says to his brother: ‘Let me get this straight,’ ‘Our father was romantically involved with a guy that could fit in his pocket, and you’re mad that he’s white?’ Aaron must then find a way to get through the funeral while at the same time coping with a misplaced body and his dysfunctional family members.

So was it worth remaking? I think so. Although the storyline pretty much remains the same between this and the original because you’re bound to find yourself laughing throughout thanks to the stellar cast and in particular the hilarious banter between Rock and Lawrence. If you love your stand-up, comedy shows or movies then trust me you won’t be disappointed.