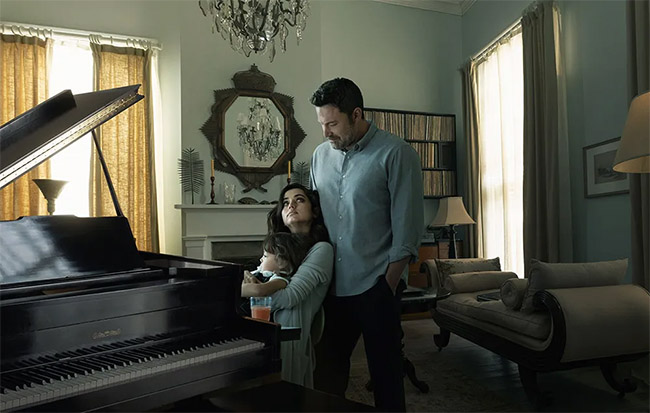 Vic (Affleck), a wealthy tech retiree, spends his days doting on his greenhouse full of snails, doting on his obstinate young daughter and obsessing over his stunning wife Melinda (Ana De Armas). Melinda, all the while, parades a long line of lovers under his and his friend’s nose, quite literally bedding them right in front of him. Whereas any normal human being would not only turn on the men in question and kick his wife to the curb, Vic calmly accepts the multifaceted layers of his toxic marriage.

What is supposed to be, at first, a dirty little arousal technique for him – and an equal anger-inducing anomaly for audiences, Vic’s stealth-like raging emotions begin to get the better of him. Each new unsuspecting bed companion for Melinda becomes the victim of Vic’s boiling and murderous rage.

De Armas plays the role of spoilt adulteress with such agonizing venom and a lack of respect for her husband; it’s hard not to dislike this woman from the very moment of the opening credits. Affleck’s one-stop-shop indifferent facial expression is plastered across his face at every gut-wrenching turn from seeing his wife getting her sexual gratification from someone else to taking a man’s life into his hands to even being found out by a friend. There seem to be nothing behind the eyes but a dark void of being.

Lyne lays out the first half of the movie with a lack of tension building but if you stick with the monotony of humiliation it’s turning into an even darker thriller comes with a tantalizing consequence that, in the end, will still make you scream at a result that is utterly inconceivable.