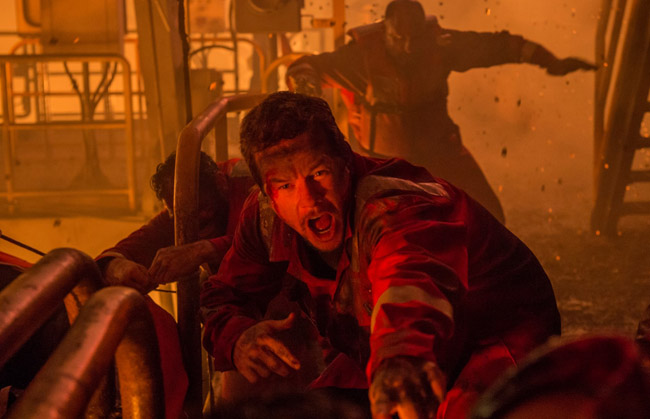 There’s always the conversation when Hollywood turns a real-life event into an epic blockbuster or Oscar-worthy drama: how much is true to life and how much has it been embellished or even completely rewritten for the entertainment of the masses?

Then there’s the issue of what the film industry decides to adapt, a lot of the events being sensitive subjects, some of which very recent in our memory. Deepwater Horizon, directed by Peter Berg (known for board game adaption Battleship) is the on-screen depiction of the worst disaster in US oil history, that only happened 6 years ago.

Fresh in many’s minds is the fire of the offshore drilling rig, which caused absolute disaster, killing 12 men and immeasurable wildlife, and burned for a total of 87 days. With court cases and BP, who leased the rig, not accepting blame, the oil industry was dragged through the mud.

The heroes and villains of the story are very clear in Deepwater Horizon. With characters fitting the cast so well, it causes to question if the parts were actually written for the each of the actors.

Berg brings back Walberg as our eyes and ears, playing electronics technician Mike Williams, a family man with attractive Texan wife Felicia (Kate Hudson) and a proud young daughter who tells everyone her daddy ‘tames the dinosaurs’. The way he interacts with not only his family but all his co-workers, once he boards the rig for his 3-week job, is undeniably charming, infectious and warming. In fact, the flow between characters including but certainly not limited to floor hand Caleb (Dylan O’Brien) and Dynamic Positioning Officer Andrea (Gina Rodriguez), plays out like an orchestra; a sense of familiarity and joy can be felt as these co-workers are reconnected and interact seamlessly with jokes at home beside heavy oil-drilling jargon.

If Mike Williams is our young hero, Mr. Jimmy played wonderfully by Kurt Russell, is certainly the wise father figure. Mike doesn’t need to be taught anything new; Mr. Jimmy isn’t here for this purpose. He is the protector of the rig, with his moral compass never quivering away from good at any moment even when challenged head on by BP reps, fronted by Donald Vidrine (John Malkovich). With his southern drawl and menacing grin, he’s unmistakably the villain of the piece forcing the team on the rig to skip some tests and run the drilling despite questionable results on others.

The film doesn’t play the disaster as a surprise, knowing too well that would be impossible. Instead, the film plays out in two halves, both as equal in strength as the other. The first blowback of the main line offers the signal to the audience that things are about to go from heavy-dialogued business drama to full blown intense disaster flick. And boy, does it get intense. The tension builds as the oil overflow turns to pressure explosions, to gas leaks to a fire that burns everything in sight and beyond. The pacing here is key and unlike other action films, it works perfectly. We’re not disorientated with flashing unclear images with deafening noises but a hyper-real journey with the team as they do what they can to not just run from the flames but try to shut it down to limit the damage and danger. This sense of immersion makes the film more effective than a lot of horror films, evoking pure fear for these characters but also a sense of dread as you place yourself there or perhaps even in in Felicia’s shoes as she’s helpless only knowing that there’s a fire but not whether her husband is alive.

What Deepwater Horizon does surprisingly well is balance the thrilling rush of a disaster film with the nuance and sensitivity of a subject based on a real tragedy that cost lives. It’s rare to see, appealing to many types of audience and delivering a strong message.

Deepwater Horizon is in cinemas September 29