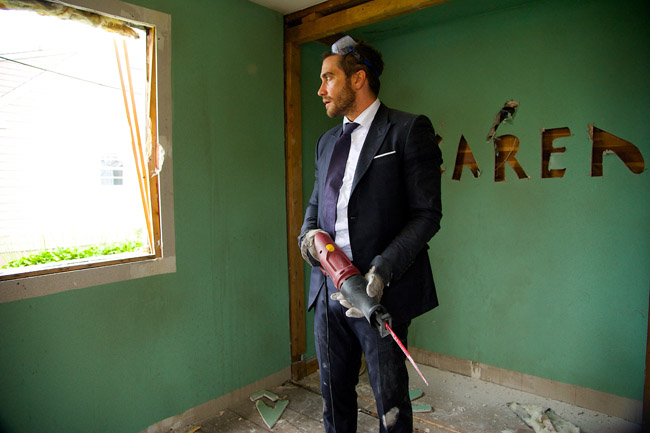 With Demolition we hope for the same kind of drama and script as Director Jean –Marc Vallee’s Oscar Nominated Dallas Buyers Club and Wild. What we get is a trip into the abyss, filled with nothingness making you feel empty and cheated, leaving nothing but disappointment.

From the very onset, Demolition tries way too hard on the melodrama front, almost trying to take on the form of a foreign film but completely missing the point. Showing the different set of processes of a man’s grief after the loss of his wife but failing to connect any real emotion. Davis (Gyllenhaal) is a successful banker who loses his wife in a car accident, one in which he walks away completely unscathed.  Sitting in the hospital waiting area showing no signs of any emotion except hunger, He attempts to buy a packet of M&M’s from the vending machine which gets stuck. Showing more anger for the fact he can’t have his M&M’s than the loss of his wife he proceeds to write numerous letters to the vending machine company pouring out his story. This leads to an unlikely early morning call from the customer service rep Karen (Naomi Watts) and an even more unlikely bizarre friendship between the two and Karen’s son.

As Davis fails to be able to grieve for his wife, he pours out his own life frustrations onto his new found friends and every little scene seems to be laden with metaphors. He questions everything about his life including that of his love for his wife. Davis flitters from denial to anger and develops an obsession to demolish (hence the title) everything around him including his state of the art home, taking apart appliances and the likes in order to deconstruct his own life to find out who he really is.

Watt’s Karen is a meek little thing, so timid she just disappears into the background there really is no point to this woman in the storyline. The chemistry between Watt’s and Gyllenhaal is non-existent, leaving a feeling of being slapped by a wet fish. The strongest part comes in the form of the friendship between her son and Gyllenhaal as he helps the boy to come to terms with the fact he is gay.

Gyllenhaal has a good stab at this role but unfortunate for him it’s the poor dialogue he is lumbered with that lets down an otherwise admirable performance. In fact, it’s the script and plot in its entirety that is full of holes. The way in which the two characters become friends is completely unbelievable, everything having a metaphor and its poor attempt on realism is jarring.

Demolition is in UK Cinemas 29 April.